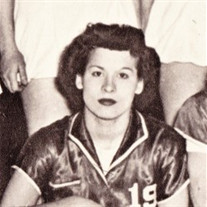 Ann Kaiko passed away on March 26, 2017 in Stamford, Connecticut, where she had recently lived with her husband of 68 years, John Kaiko, at the Villa at Stamford. She was 88 years old. Ann was born and raised in Newington, Connecticut, where she lived until 2012. Her parents, Paul and Jadwiga (Waltos) Kraft, came to Connecticut from Poland. They had five other children: Lucien, Frank, Edward, John and Josephine. Ann was the youngest and survived her parents and siblings. She attended Newington High School and her first job was in New Britain, Connecticut, at a manufacturing company. Joining the company basketball team, she quickly developed into a skillful and fiercely competitive player. She was a lifelong devotee of women’s basketball. In 1948, she married John Kaiko, of Griswold, Connecticut, and joined him at K-B Manufacturing in New Britain, a company which John had started from scratch. Together, they grew the company into one of the best-known small precision secondary operations machine shops along the Connecticut River. As the company grew, in addition to her responsibilities at K-B, Ann found time to be an active member of the Hartford-New Britain Chapter of the Polish Junior League of Connecticut. Ann and John raised three daughters, Jo-Ann Kaiko (of Newington), Judy Daunt (Manchester), and Jackie Kaiko (Stamford). She is survived by her daughters and their husbands Stephen Daunt and Marshall Millsap; and Kraft and Kaiko family nieces and nephews. Ann was the grandmother of Stephen Daunt, Jr., and Nicholas Daunt both of California. In her later life, Ann became an avid fan of Dartmouth College Football along with her keen support for UConn Women’s Basketball. Her long and rich life will be celebrated at a private family gathering. In lieu of flowers, her memory may be honored through a contribution in her name to the: UConn Women’s Basketball Program at: The UConn Foundation, Inc., 2390 Alumni Drive, Unit 3206, Storrs, Connecticut, 06269 Information - (860) 486-2532. Arrangements have been entrusted to the Bosak Funeral Home, 453 Shippan Avenue, in Stamford, CT. If you would like to leave an expression of sympathy for the family online, you may sign the guestbook at www.bosakfuneralhome.com or visit the funeral home Facebook page at www.facebook.com/ bosakfuneralhome to share memories with her family.

Ann Kaiko passed away on March 26, 2017 in Stamford, Connecticut, where she had recently lived with her husband of 68 years, John Kaiko, at the Villa at Stamford. She was 88 years old. Ann was born and raised in Newington, Connecticut, where... View Obituary & Service Information

The family of Ann Kaiko created this Life Tributes page to make it easy to share your memories.