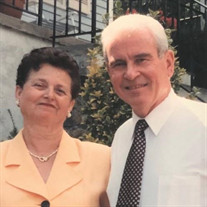 Anna and Peter Mihalopoulos died at home on Saturday, January 25, 2020. Anna, 83, was born in Pellana, Greece, the daughter of Ilias and Vasiliki Perdikes. Peter, 81, was born in Georgitsi, Greece, the son of Christos and Marika Mihalopoulos. Adored by their children, they were cherished parents, married for over 50 years, having celebrated that joyous milestone in 2018. They immigrated to America from the Peloponnesus region in Greece in 1968 and felt blessed to come to Stamford, a place they often described in Greek, “the best area.” They lived the American Dream. They were honored to raise and educate three children in Stamford and considered education one of the greatest privileges of life. The Greek Orthodox community of the Annunciation in Stamford has been a North Star for the family, and where Anna and Peter have been embraced and loved, and had the honor to serve for decades. Peter was dedicated to selling tickets for the car raffle at the annual Greek Festival on the church grounds on Newfield Avenue, where he was a trusted and very dedicated servant since the old days when the church was located on Pacific Street. He was a machinist retiree from Baldwin Gegenheimer on Shippan Avenue where he was lucky enough to work since “the next day” after he arrived in America, and steadfastly remained employed for over 30 years. The company changed names to Baldwin Technology and ultimately moved to Shelton where Peter worked in the final years before he retiredPeter, a benevolent man, kept a garden all his years in Stamford, and was particularly proud of his figs and tomatoes which Anna and Peter shared with neighbors, their children’s teachers, friends, and family every summer. Anna, who had a beautiful singing voice and a hilarious sense of humor, worked on the production line at Clairol for nearly 25 years. They valued the opportunities and prosperity that came from their industry jobs in Stamford, and embodied a very strong work ethic which is their legacy, along with their family. They were devoted to raising their three children, around whom they centered their lives. It was not easy to leave their own parents and relatives in Greece, and start a new life in Connecticut but they were filled with the optimism, hope and promise of life and America. One of their greatest joys was having six grandchildren, who felt so very loved by their beautiful and doting grandparents. Anna and Peter contributed to the community in various and meaningful ways, most importantly by being very good, decent people who loved each other, their children, and humanity in an abiding way. They always felt proud of their Greek heritage and ancestors, and had tremendous gratitude for the opportunities in this country, their adopted homeland which they loved. Anna and Peter are survived by their children, Chris Mihalopoulos of Danbury CT, Mary Refermat (David) of Pittsford, NY, and Valerie LaRose (William) of Rhinebeck, NY. Also survived by their grandchildren, Annie, Peter, John, and Rebecca Refermat, and Caswell and Eliana LaRose. Anna is survived by her brother, Costas Perdikes (Voula) of Stamford. Both Anna and Peter are survived by many cherished nieces and nephews, here and in Greece. In addition to their parents, they are predeceased by Peter’s three siblings: Athanasia Katsarou, Athena Paloukakis, and Ilias Mihalopoulos; and by Anna’s brother, Christos Perdikes, and four sisters: Panagiota Perdikes, Joan Sigalos, Zaharo Varoutsou, and Athanasia Perdikes. They are also predeceased by their nieces, Eleni Katsarou and Eleni Varoutsou. The family will receive relatives and friends at the Annunciation Greek Orthodox Church located at 1230 Newfield Ave, Stamford, CT, TODAY, Thursday, January 30, 2020 from 4pm - 8pm, with Trisagion Prayers chanted at 7:30pm. A funeral service is planned for Friday, January 31, 2020, 11am at the Annunciation Greek Orthodox Church. The interment will take place immediately following the funeral service at St. John's Cemetery in Darien, CT. In lieu of flowers, the family requests that memorial donations in remembrance of Anna and Peter be made to the Annunciation Greek Orthodox Church 20/20 Capital Campaign. We hope their lives continue to inspire others to spend time with family, work hard, and make all of their dreams come true. Wake and funeral arrangements have been gratefully entrusted to Bosak Funeral Home, 453 Shippan Avenue, Stamford, CT. If you would like to leave a condolence message for the family you may visit the guestbook on bosakfuneralhome.com.

The family of Anna and Peter Mihalopoulos created this Life Tributes page to make it easy to share your memories.

Anna and Peter Mihalopoulos died at home on Saturday, January...