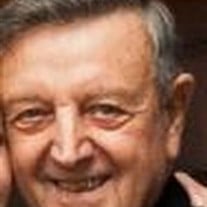 Anthony "Tony" Portanova, 82, of Stamford, CT. passed away on January 4, 2015. He was born in Stamford on January 13, 1932 to the late Ralph and Vincenza Tangi Portanova.Tony is survived by his wife of 61 years, Carmela Cavaliere Portanova; his children, Debra Nelson, Susan Rogliano and her husband Robert, A. Michael Portanova and his wife Robin, and David Portanova and his wife Laura; grandchildren Elizabeth Nelson McFarlane and her husband Gregory, Jacquelyn Nelson, Catherine Rogliano, Anthony Michael III and Nicholas Portanova, and Alexa and Jonathan Portanova; and a great-granddaughter Avery McFarlane. He is also survived by a large extended family. He was predeceased by eight brothers and sisters.Tony was not only a gentleman, but a gentle man, who lived an honest life and cherished his family. He was a man of honor and integrity. He loved God and his country. Generous and kind, Tony would give the shirt off his back to anyone in need without question.In his youth he was a member of the Stillwater Indians baseball team. Those friendships continued to this day. He was an avid duck pin bowler and a member of the Knights of Columbus. He loved playing cards, traveling with his wife, and was always on the go.Tony served in the United States Navy from 1951-1955. Upon returning to Stamford, he formed C&P Excavating Contractors with partner Frank Cavaliere, which continued until 1988. In 1988, Tony established Portanova Excavating with his sons, Michael and David. He was held in high regard by all who knew him.Visitation will be held on Thursday January 8th from 4pm-8pm at Bosak Funeral Home, 453 Shippan Avenue, Stamford, CT. A funeral mass will be held on Friday, January 9th at 10:30am at Sacred Heart Church, 37 Schuyler Avenue, Stamford, CT. Burial will take place at a later date.In lieu of flowers, the family requests that donations be made to: Stamford Education 4 Autism, 1127 High Ridge Road, PMB #315, Stamford, CT 06905.

Anthony "Tony" Portanova, 82, of Stamford, CT. passed away on January 4, 2015. He was born in Stamford on January 13, 1932 to the late Ralph and Vincenza Tangi Portanova.Tony is survived by his wife of 61 years, Carmela Cavaliere Portanova;... View Obituary & Service Information

The family of Anthony M Portanova created this Life Tributes page to make it easy to share your memories.

Anthony &quot;Tony&quot; Portanova, 82, of Stamford, CT. passed away on...