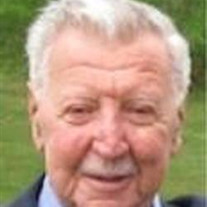 Anthony Romano, 85, lifelong resident of Stamford, CT, passed away on the morning of Thursday, August 21, 2014 at Stamford Hospital. Anthony was born on July 5, 1929 in Stamford, and was one of three children born to the late Nicholas and Mary (Mallozzi) Romano.   Anthony attended Stamford public schools and graduated from Stamford High School with the class of 1948. After graduating high school Anthony enlisted in the U.S. Army where he served during the two years leading up to the Korean Conflict.  Following his discharge from the service he returned home to begin his 50 plus year career as a master contractor. Anthony was a skilled craftsman, and over the course of many years in business he constructed numerous homes of distinction in Greenwich, Stamford and throughout Fairfield County.  Mr. Romano was very active in the community and was a member of the Knights of Columbus, St. Augustine Council #41, the Elks Club of Stamford, the Glenbrook Athletic Club, the Piedmont Club of Darien, St, Lawrence Club of Cos Cob, CT and the Sons of Italy of Bradenton, FL.  One of his greatest joys was to travel with his wife Estelle.  In their many trips together they had the good fortune to visit many remote destinations throughout the world.  Anthony enjoyed the game of golf, especially when he played with his regular group “The Has Beens” at Hubbard Heights.  He was also a longtime parishioner of St. Leo Church in Stamford and was dedicated to his faith and his church.  Anthony is survived by his beloved wife of 61 years, Estelle (Cassell) Romano, his three children; Mary Louise Romano, Desiree Gray and Toni Price, and husband Bill, and grandchildren; Nicholas, Hayley and Alexandra Price. He is also survived by his sister, Carmella Bruno, and sister-in-law, Joan Romano. In addition to his parents, Anthony was preceded in death by his brother John Romano, and brother-in-law John Bruno.  The Romano family will receive the condolences of friends and family on Monday, August 25th from 4p.m. to 8p.m. at Bosak Funeral Home, 453 Shippan Avenue, Stamford, CT 06902. A Mass of Christian Burial will be celebrated on Tuesday, August 26, 2014, at 10 a.m. at St. Leo Church, 24 Roxbury Rd., in Stamford. Interment will be private.  In lieu of flowers memorial donations may be made to his favorite charity, St Jude Children’s Research Hospital, 501 St. Jude Place, Memphis, TN, 38105 or online at www.stjude.org/donate.    The family has entrusted the funeral arrangements to Bosak Funeral Home, 453 Shippan Avenue, in Stamford. If you care to leave an online condolence message you may do so on the family guestbook hosted on bosakfuneralhome.com or on the funeral home's Facebook page at facebook.com/bosakfuneralhome.

Anthony Romano, 85, lifelong resident of Stamford, CT, passed away on the morning of Thursday, August 21, 2014 at Stamford Hospital. Anthony was born on July 5, 1929 in Stamford, and was one of three children born to the late Nicholas and Mary... View Obituary & Service Information

The family of Anthony Romano created this Life Tributes page to make it easy to share your memories.