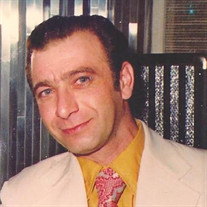 Anthony “Tony” Senerchia, formally of Stamford, Connecticut transitioned peacefully at home on November 10, 2019. He was born on April 10, 1938 in New Canaan Connecticut to the late Michael and Mary Senerchia. He worked full-time for Mount Vernon Die Casting. While only wanting to provide the very best for his family and putting their needs in front of his own, he also worked part time for Leone Distributors. He then worked for and retired from the City of Stamford and moved to Deerfield Beach Florida. Due to his love of driving and his many road trips he started Tony’s Limo Service & had many loyal customers. When Tony wasn’t driving, you could find him walking at Constitution Park or having breakfast with the guys. Anthony is survived by his wife of 58 years Ann, daughter Linda (Steve) Senkowicz, his three sons Fred (Joan), Joseph, and Mark (Kim). He also leaves behind ten grandchildren and ten great grandchildren. Two sisters Angie Allegretta of Clarksville, TN, Jean Ng of Aurora, CO, and his brother Robert of Northridge, CA along with many nieces and nephews. He is predeceased by his brothers Albert and Michael along with one granddaughter Noel Senerchia. The family would like to thank Trustbridge for their emotional support and outstanding medical care. Donations may be made in his honor to: Trustbridge Hospice Foundation. Attn: BlueJay Care Group, 5300 East Ave, West Palm Beach, FL 33407. To honor Anthony, the family will receive relatives and friends on Thursday, December 12, 2019 at Bosak Funeral Home located at 453 Shippan Ave., Stamford, CT, 06902 from 3pm to 6pm with a prayer service at 6pm. The family has entrusted the funeral arrangements to Bosak Funeral Home, 453 Shippan Avenue, in Stamford, CT. If you would like to leave a condolence message for the family you may visit the guestbook on bosakfuneralhome.com or on Facebook at facebook.com/bosakfuneralhome.

Anthony &#8220;Tony&#8221; Senerchia, formally of Stamford, Connecticut transitioned peacefully at home on November 10, 2019. He was born on April 10, 1938 in New Canaan Connecticut to the late Michael and Mary Senerchia. He worked full-time... View Obituary & Service Information

The family of Anthony "Tony" Senerchia created this Life Tributes page to make it easy to share your memories.