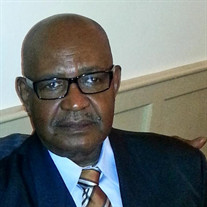 Augustin Auguste, beloved father and grandfather went home to Jesus Christ on August 12, 2018 after a long battle with prostate cancer surrounded by his family. He was born July 19, 1937 in the community of Leone in Jeremie, Haiti to his Cuban mother, Florena Cadet and Haitian father, St. Victor Auguste. He was the sibling to his older sister Sylvia Auguste and younger sister Dieudonne Gay. At six years old, he began his travels to Port-au-Prince, Haiti where he remained until he immigrated to the United States. Augustin Auguste was known as a strong-willed, kind, outspoken and lover of fun. He became a deep-sea fisherman by trade due to his determination to provide for his family, love for adventure, people, and food. His determination would cause him to sail from Haiti to the United States. Upon his arrival, he began working odd jobs until he found his passions, which were food and people. He worked his way up from being a dishwasher to becoming a chef at Juliano’s Caterers and Marriott Hotel when he lived in New Rochelle, NY and Lansing, MI. When he moved to Providence, RI he retired as a steel worker at Lavigne Manufacturing. While retired, he enjoyed focusing more on many of his hobbies such as traveling to and from Haiti, spending time with his family and friends, cooking grand meals, being an avid sports fan of basketball, football, MMA, and soccer and listening and dancing to music. Raised a Roman Catholic since birth, at the wonderful age of 80 , he gave his life to Jesus Christ and attended Theophile Church in Christ, Inc in Stamford, CT. He is survived by his partner of 31 years, Marie F. Nevilcar and his children Fady Auguste, Miraculeuse Auguste Joseph, Micheline Auguste Zulme, Kerline Auguste Ferol, Micheline Auguste, Merlange Auguste, Evens Auguste, Anasta Auguste, Ernst Auguste, Siliclaire Simon Auguste, Nerlande Auguste, Manette Auguste, Elizabeth Nervilcar Justin, and Sylvia Auguste Hilair; his 32 grandchildren and 7 great grandchildren. His family will miss his presence and strong, loving spirit. They will live in the legacy and courage he instilled in them. Family and friends may offer their condolences on Friday, August 17th from 4pm to 8pm at the Bosak Funeral Home, 453 Shippan Avenue, Stamford, CT. A celebration of his life will take place on Saturday, August 18th at 10am at the funeral home. His interment will immediately follow at Spring Grove Cemetery, 41 Hecker Ave, in Darien, CT. The family has entrusted the funeral arrangements to Bosak Funeral Home, 453 Shippan Avenue, in Stamford, CT. If you would like to leave a condolence message for the family you may visit the guestbook on bosakfuneralhome.com or on Facebook at facebook.com/bosakfuneralhome.

Augustin Auguste, beloved father and grandfather went home to Jesus Christ on August 12, 2018 after a long battle with prostate cancer surrounded by his family. He was born July 19, 1937 in the community of Leone in Jeremie, Haiti to his Cuban... View Obituary & Service Information

The family of Augustin Auguste created this Life Tributes page to make it easy to share your memories.