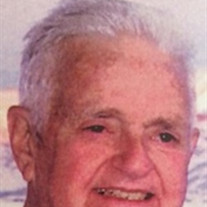 Brace “Duggie” Wynkoop, 85, passed away at Stamford Hospital on Friday, October 30, 2015 with his wife and his family by his side. He was born January 16, 1930 in Stamford, to the late Brace and Louise (Madigan) Wynkoop. Raised in Stamford with his four siblings, Brace served in the Korean War after graduating from Stamford High School, and continued his service in Germany, where he met his wife Erika. After returning to the States and eventually leaving the Army, Brace and Erika settled back in Stamford to raise their growing family, where he pursued his career in Engineering at Stelma/Data Products. Brace lived a long and full life, always devoted to and immersed in activities with family and friends. A life-long learner, he enjoyed many interests over the years, delving into astronomy, opera, hiking, skiing, and even tried roller-blading at 65. He enjoyed many years of camping with the family and their dear friends the Bells, and later many travels and holiday weekends with the couple’s many friends. Throughout his life, Brace’s enduring passion was his love of bicycling, which he last attempted only weeks ago. He is survived by the love of his life, Erika, his daughters Karin Wynkoop Hunsberger(Dan), Joanne Wynkoop Aronson(Andy), Sue Spartas(Dale), and his son Steve(Petra). He also leaves behind grandchildren Scott and Lauren Chila, Michael Wynkoop, Elizabeth, Sarah, and Christo Spartas, Gus and Tess Aronson, and great-grandchildren Joey, Gus, Isabella, and Marco. He will also be missed by his brother-in-law Henry Baker and his nieces and nephews, who all knew him as “Duggie.” In addition to his parents Brace is preceded in death by siblings Russ Wynkoop, Betty Douglas, Louise Teufel-Alipranti, and Joan Baker, and niece Chris Ponticello. Brace was also sadly predeceased by his beloved grandson Stephan Wynkoop. The Wynkoop family will receive sympathy and condolences on Wednesday, November 4, 2015 from 4-6PM at Bosak Funeral Home, 453 Shippan Avenue, Stamford, CT 06902, followed by a brief prayer service. In accordance with Brace’s wishes, the interment will be private. In lieu of flowers, the family has asked that donations be made to VFW Post 9617 Scholarship Fund, PO Box 4712 Stamford CT 06907 Please visit the family guestbook on www.bosakfuneralhome.com or at www.facebook.com/bosakfuneralhome.

The family of Brace Wynkoop created this Life Tributes page to make it easy to share your memories.