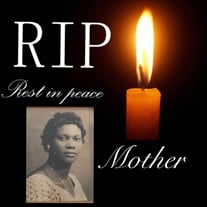 Carmelite Placide AKA " Madan Pye" passed away and entered eternal rest with the Lord on April 26 2020 at Stamford Hospital from complications due to coronavirus. She was born on March 19 1937 in Port-au-Prince, Haiti. She was the first of two children born to Hermite Augustin and Rippert Placide. Tragically, Hermite Augustin died when the two siblings Carmelite and Beliotte AKA "Uncle Beb" were very young. Fortunately for the two, their beloved paternal grandmother who was a very strong woman took them under her wings and raised them together. The two remained very close to each other until the end. Carmelite grew up to be a well- respected member of her community. During her youthful days, she participated in several plays and music/dance contests at the prestigious Theatre du Verdure in Port-au-Prince. She was also the Girl Scouts' Captain. As she got a little older, she became an excellent professional tailoress and fashion designer. She was also an entrepreneur and a business woman. Later on, in life, she moved to America where she worked as a Lab technician for Estee Lauder at Jericho Laboratories Inc. Built like an Amazon, she was known as a devoted and protected mother who successfully raised her children. She was also a mother figure to her dear nephew and her nieces, and to many others she crossed paths with. She was predeceased by her husband Horgard Pierre, her eldest son Anael Alerte and her stepson Erntz Pierre. She is survived by her five children, Marie P. Belfort, Horlna P. Charles, Holny P. Jean-Louis, Junior Pierre and his wife Sandra C. Pierre, Marjorie P. Butler and her husband Shakim Butler. Her grandchildren, Aliyah A. Rivera and family, Lorrie B. Reid and her husband Karim Reid, Dukens Riche and his wife Daphne Riche, Christie Metellus and her husband Romelus Metellus, Anael J. Alerte and his wife Shirley J. Alerte and family, Gerard Belfort and his wife Maxine Belfort, Junissa Pierre, Georges Fils Jean-Louis, Georgenyson Jean-Louis, Horlnestine Charles, Hogarth Charles and his wife Zipporah Charles, Holny Carmencine Jean-Louis, Jonathan Pierre, Daniel Pierre and family, Patricia P. Joseph and family, Loris Pierre and family, Dieumy Pierre and family. Sabine Pierre and family, Mickelange Pierre and family, Pakito Pierre and family, Rivelino Pierre and family. Great grandchildren, Jeremiah Metellus, Ryshawn Metellus, Gabrielle Reid, Romelia Metellus, Nathan Riche, Faith Reid, Noah St Bernard, Brianna Riche, Amber Rivera, and Carter Jackson Charles. Her brother Beliotte Placide, her adoptive brother Felix Michaud and family, her nephew Jean Kopa Placide and his wife Claire L. Placide and family, her nieces Mirlene Placide and family, Jaira Placide and family, Wilza Placide and family. Her stepdaughters Yvrose Pierre and family, Jumise Pierre and family, Nadine Pierre and family, Delourdes Pierre and family. Her stepsons Jean Herbo Pierre and family, Bonard Pierre and family, and all extended families and friends. Carmelite was an adored and beloved mother, aunt, grandmother and great grandmother. She will be missed immensely by everyone who loved her. She will be forever in our hearts. Due to the concerns at this time surrounding social gatherings, a public memorial service will be held at a later date at the discretion of family. Family would like to thank everyone for the kind words, prayers and all expressions of love and sympathy you've given during this difficult time. The family has entrusted the funeral arrangements to Bosak Funeral Home, 453 Shippan Avenue, in Stamford, CT. To leave a condolence message for the family you may visit the guestbook at www.bosakfuneralhome.com or on Facebook.com/bosakfuneralhome.

Carmelite Placide AKA " Madan Pye" passed away and entered eternal rest with the Lord on April 26 2020 at Stamford Hospital from complications due to coronavirus. She was born on March 19 1937 in Port-au-Prince, Haiti. She was the first of two... View Obituary & Service Information

The family of Carmelite Placide created this Life Tributes page to make it easy to share your memories.