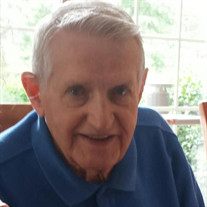 Charles J. Hett, 91, of Darien, CT, earned his angel wings and entered into God’s glory on March 5, 2020. Charles also known as Chaz and Charlie blue eyes, was born September 13, 1928 in Stamford, CT to the late James Hett and Irene Hett. Charles graduated from Darien High School in 1948 and then went on to join the United States Army Reserves Infantry in 1951. He was stationed in Germany during the Korean War for 2 years and often reminisced telling stories of his time in the service and described his military service as an honor and how seeing many parts of the world as one of the best periods of his life. He worked as a shipping and receiving manager in various Stamford businesses over the course of his career. In 1953, he married Harriet Kostulias in Stamford at St. Cecelia Church and afterwards they made their home and raised their children in Stamford and then Darien, CT. He was a devoted husband who loved his wife more than anything and everything, the love of his life to this day. Charlie enjoyed playing golf and was also a baseball and a football coach. He loved watching sports, family barbeques, and spending time with his family. He loved his children, grandchildren, and great grandchildren very much; the dogs even more. Anyone that knew him, would understand this humor. You could often find Charlie eating a huge bowl of ice cream and sharing it with the dog; not to mention, his hidden stash of Hershey kisses that he would so proudly hand out to everyone. Charlie is survived by his loving wife of 67 years, Harriet, his children Irene Keeler and her husband Chuck Keeler, Richard Hett, William Hett and his wife Carolyn Hett. He is also survived by his grandchildren Candace Perrone, Kristin Keeler and her partner Dominic Telesco, and Ashley Keeler, and Natalie and Eric Hett and great grandchildren Chance Perrone and Brody Keeler Telesco. Charlie is predeceased by his son Charles B. Hett , his sister, Helen Lapolla, and his brothers, James and Francis Hett. The family would like to thank everyone at Stamford Hospital, The Long Ridge Post Accute Care Facility and Marisol Roman for caring so deeply for Charlie. In Lieu of flowers, the family requests that donations be made in Charles’s name to the Veterans of Foreign Wars (VFW) or Outreach to Pets In Need, 1747 Summer Street, Stamford, CT 06905. Family will receive relatives and friends on Tuesday, March 10th from 4pm – 8pm at Bosak Funeral Home, 453 Shippan Avenue, Stamford, CT. There will be a prayer service on Wednesday, March 11th at 11am also at Bosak Funeral Home. Military honors and burial will follow immediately after at St John's Cemetery, 25 Camp Avenue, Darien, CT. The family has entrusted the funeral arrangements to Bosak Funeral Home, 453 Shippan Avenue, in Stamford, CT. If you would like to leave a condolence message for the family you may visit the guestbook on bosakfuneralhome.com or on Facebook at facebook.com/bosakfuneralhome.

The family of Charles J. Hett created this Life Tributes page to make it easy to share your memories.