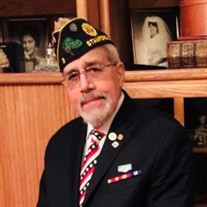 Charles Henry Trudeau, born in NYC, NY June 15, 1943 passed away on October 15, 2019 at his home surrounded by his family and loved ones. Son of Lt. Col. Carlos E. Dominguez (US Army) and Alice Amy, and stepson of Joseph Trudeau. Chuck, as he was affectionately known to his friends and family, grew up in New York City and Peekskill NY. He attended The University of Arizona in Tucson AZ majoring in Business and Finance. Following his studies at Arizona he worked for The Continental Insurance Company in Manhattan and in 1967 entered the US Army, serving most of his overseas service in Japan as part of the Finance Division support of the Vietnam War. Before leaving for Japan, he married Lee Penfield in September 1967. Chuck and Lee had 3 children; Christopher Charles Trudeau (Darcey Agostino Trudeau), Emily Sarah Trudeau (Bruce Ray) and Andrew James Trudeau (Jennifer Booth Trudeau). In addition to his wife and 3 children, he is survived by 7 grandchildren, Zachary, Chloe and Julianna Trudeau, Kayla and Naomi Ray and Surrey and Felix Trudeau. Upon returning to the states from Japan, Chuck and Lee lived in NY state, Puerto Rico, Chicago, Illinois and a 9 ½ year assignment overseas with The Continental Insurance Company, residing in Croydon, England. This remained one of the most joyful parts of their married life together. In England they were introduced to several breeds of dogs that initiated their joint passion for showing and breeding purebreds. They fell in love with the West Highland White Terrier breed which introduced Chuck into the showing of his own dogs for a number of years. Through the passion for the breed he met people from all over the country with the same passion and thus began the creation of an amazing group of friends who have remained close for decades. Chuck was a founding member of the West Highland White Terrier Society of Connecticut and served on numerous committees on the National Westie club, the WHWTCA. From his boyhood, Chuck’s main passion was military history which led him into a lifelong hobby of collecting and painting toy soldiers. There was not a military campaign that he didn’t have a full knowledge and understanding of, and he continued to share this knowledge with people from all walks of life. He turned his focus into the creation of detailed award-winning dioramas of battles covering centuries of military history. His attention to detail and accuracy was renowned and enjoyed by those who came to visit and see his creations. Chuck’s business career was spent with both The Continental Insurance Company and Tokio Marine Management in the specialty area of Inland Marine Coverage. He enjoyed this area as it allowed him to travel to various countries and meet people from around the world. In addition to his main hobbies, he loved working in his garden and tending to his beloved Koi pond with his adult children. No project was too big or too small to tackle and his determination to see projects through to the finish was something he relished. After retirement, he became an honored member of the VFW Post 9617 in Stamford, The American Legion and the Knights of Columbus. He loved these organizations and the camaraderie that he enjoyed with so many local veterans and residents. These groups provided a close-knit brotherhood that stayed with him to the very end. Surely, they were a big part of his heart and dedication to the human spirit. To celebrate Charles’s life, visiting hours and a memorial service will be held from 11am to 2pm on Saturday, October 26that the Bosak Funeral Home, 453 Shippan Avenue in Stamford, CT. Interment will be private. In lieu of flowers, please donate in Charles’s memory to one of these organizations: Prostate Cancer Foundation: https://prostatecancer.foundation/projects/donate-to-the-prostate-cancer-foundation/donate, American Cancer Society: https://donate3.cancer.org/ , Veterans of Foreign Wars (VFW): https://heroes.vfw.org/page/21776/donate/1 , Knights of Columbus: https://www.kofc.org/en/secure/charities/annual-appeal.html Or to The American Legion: https://www.members.legion.org/tal/donatenow#legion-org The family has entrusted the funeral arrangements to Bosak Funeral Home, 453 Shippan Avenue, in Stamford. If you would like to leave an online condolence message for the family visit the family guestbook on bosakfuneralhome.com or on Facebook at facebook.com/bosakfuneralhome.

Charles Henry Trudeau, born in NYC, NY June 15, 1943 passed away on October 15, 2019 at his home surrounded by his family and loved ones. Son of Lt. Col. Carlos E. Dominguez (US Army) and Alice Amy, and stepson of Joseph Trudeau. Chuck, as... View Obituary & Service Information

The family of Charles Trudeau created this Life Tributes page to make it easy to share your memories.