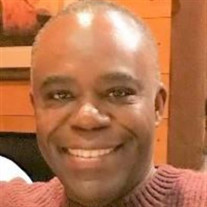 Eden Benoit, 61, Beloved husband, father, brother, uncle, son and friend to all. Eden Benoit, 61, long term Fairfield County resident of both Norwalk and Stamford, CT, entered eternal life on Tuesday, February 23, 2021 at Stamford Hospital, after fighting valiantly through a complicated illness. Eden was born on April 8, 1959 in Port-au-Prince, Haiti to Lucianie Icart and Crefils Benoit, who predeceased his son on March 5, 2010. Eden spent his early childhood in Haiti, with his mother and sister, Ingrid Benoit Louis, where he attended St Jean Evangelist School until he immigrated to the U.S. Growing up in Haiti for the first 12 years of his life, Eden enjoyed playing soccer, marbles and spending time with his cousins and friends. He immigrated to Stamford, CT., where he joined his father, close family, Carmen Benoit and Benis Benoit, who passed away on August 9, 2008, as well as his cousin and confidant, Gary Benoit. He attended and graduated from Westhill High school in 1977. Before joining the U.S. Marines Corps, from which he was honorably discharged in 1981, Eden was a consummate, loving brother who delighted and shepherded his five sisters, Ingrid Benoit, Caroline Maignan, Anne Marie Benoit, Tania Delbrune and Michèle Benoit. As an early member of the budding Haitian community growing in lower Fairfield County in the 1970s, Eden had far reaching connections that served as an example and offered practical, daily help acclimating to life in a new country. Always with a warm smile and a willingness to serve, Eden was often among the first to welcome new immigrants from Haiti, as he and his father helped arriving families at the airport with everything from settling into new homes to finding employment or getting children enrolled in school or life-enriching extra-curricular activities. In 1985, Eden met the love of his life, best friend and wife, Wendy Deonanan Benoit. Together, they built a life, first living in Stamford and ultimately building a home and family in Norwalk, CT. They married in July 1992 in Jamaica. Their two children, Jean-Marc Benoit, 25, and Alexa Benoit, 23, both graduated from Brien McMahon High School, in 2014 and 2015, respectively. From coaching sports to carpooling, Eden was a consistent, open and wise presence for the young people he engaged. As a friend and neighbor put it; “Eden was always available with support, a smile and great guidance,” for every person who crossed his path. Eden worked for 23 years at Pitney Bowes as an IT specialist. Most recently, Eden served as a site supervisor at the Biltmore Condominium in Stamford, CT. In both roles and within both communities, Eden was a friend to all and his name brings a warm smile and likely a wistful laugh with a memory of his kindness, positivity and ease of being. Always willing to lend a helping hand, Eden had a penchant for gadgets and bringing new life to discarded objects His trademark patience, smile and generosity added a special magic to whatever he touched. Eden is survived by a large, loving family in Connecticut, New York, North Carolina, Florida, Canada, Haiti and France: his wife, Wendy and his two children, Jean-Marc and Alexa; his mother Lucianie and stepmother Justine Benoit; his sisters, Ingrid, Caroline (husband Jean Maignan), Anne Marie, Tania (husband Michael Rogers) and Michèle. The extended family also mourns his loss, to whom Eden was a strong and loving figure: his nieces and nephews Kevin Lesperance (wife Wisenite, son Jalen), Nadia Benoit (son Aidan), Dafnée Louis, Brandon Benoit, Daniel Louis, Rebecca Benoit (daughter Trinity), Erika Delaneau (daughter Phoenix), Bradley Delaneau (son Gavin), Cynthia Delaneau (daughter Juviana), Kenneth Louis, Shawn Maignan, Josh Maignan (son Jaemarian), Matthew Maignan, Sachel Rogers and Ava Rogers. A service of remembrance and celebration will be held at Bosak Funeral Home, 453 Shippan Avenue on Saturday, March 6, 2021. The viewing will be held from 10am-12pm with the service to be begin at 12pm. Due to COVID restrictions and social distancing, participation in the service will be limited and by invitation only, to maintain the health of all participants. His wake and service will be live streamed so family and friends can attend virtually. To attend, please select “webcast video” on Eden’s obituary at www.bosakfuneralhome.com. A memorial fund has been established by the board and residents of Biltmore at https://gofund.me/663a85bc. The family gratefully thanks everyone for their generosity and kindness during this very difficult time. “I carry your heart in my heart.” - e.e. cummings In compliance with state mandates and the safety of all those attending his funeral services, it is mandatory to wear face coverings and maintain social distancing. If you would like to leave a condolence message online please visit the family guestbook to share memories with his family at www.bosakfuneralhome.com or www.facebook.com/bosakfuneralhome.

The family of Eden Benoit created this Life Tributes page to make it easy to share your memories.