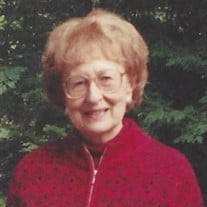 Elaine Frances (Stefanowski) Mrus passed away in her sleep at home in the early hours of Tuesday, May 25, 2021. She graced our lives for 90 years and 11 months. Elaine was born in Stamford on Tuesday, June 24, 1930 and was the first of four children of Anthony Stefanowski and Helen (Zebrowski) Stefanowski. Elaine spent her early years in Stamford, and when she was eight years old, she and her family moved to Springdale. During high school, Elaine worked part-time at C.O. Miller department store in Stamford in their Merchandizing Department. She used her love of art and design to set up displays of merchandise within the store as well as the presentations in the store’s plate glass windows fronting Bank Street. Once Elaine graduated from Stamford High School in 1948, she was promoted to Buyer for the Women’s Department at C.O. Miller. In 1949, Elaine was ready to move to New York and get a job as a buyer for Bloomingdale’s. But then at a dear friend’s wedding where she was the bridesmaid, she met the best man who was home from Notre Dame University for the wedding. Elaine traded her dream of being a buyer at a fashionable department store in New York City for her other dream of marrying and raising a family. Elaine F. Stefanowski and Stanley T. Mrus married on May 5, 1951. In June of 1953, they purchased property in New Canaan. After work and on weekends, they, with the help of their families, built their dream home. Their home reflected Elaine’s love of art and design in the simple yet elegant interior. The landscaping with its peaceful rock gardens, graceful curving planters, and colorful flowers, azaleas, and flowering trees also reflected Elaine’s touch. She and Stan were fortunate to live all their days in the home of their dreams. Elaine loved art and design and had dreamed of going to college to get her degree. In 1963 she pursued that dream by enrolling in the University of Bridgeport as an Art major. While she studied all forms of artistic expression, she discovered her love of painting, sculpture, and photography. Elaine was a frequent exhibitor in the prestigious New England Exhibition (now known as Art of the Northeast), the juried exhibition held since its inception in 1949 at the Silvermine Guild of Art in New Canaan. She also exhibited her paintings and sculpture in the annual New Canaan Art Show, the Carriage Barn in New Canaan, and other local and regional art exhibitions. Elaine’s artistic talent flourished in photography. She was a very active member of the Stamford Camera Club and consistently won prizes both locally and regionally for her photographs. In 2007 she was awarded the prestigious Lifetime Achievement Award for her body of work. Elaine’s works are collected by corporations such as Time Warner and Champion as well as by private art collectors. In her “retirement” years, Elaine continued with photography and her activities with the Stamford Camera Club, but she also became very active in Lifetime Learners Institute, based out of Norwalk Community College. There she took a wide range of classes in subjects such as poetry, music appreciation, comparative religions, and current events. She and Stan also attended lectures and films at local libraries and had season tickets to The Met: Live in HD at Fairfield University. Elaine and Stan traveled extensively in the Northeast and out West. In their travels they visited many of our National Parks such as Acadia in Maine, Arches in Utah, Yellowstone in Wyoming, Joshua Tree in California, and the Grand Canyon in Arizona, to name a few. In pursuing her dreams, Elaine lived an remarkable, interesting, and fulfilling life. She was—and still is—an inspiration to those whose lives were touched by her love, compassion, and grace. She is sorely and deeply missed. Elaine is predeceased by Stan Mrus, her husband of 63 years, her parents Tony and Helen Stefanowski, her parents-in-law Stanley and Sophie Mrus, and her brothers-in-law Frank Karas and Bob Mrus. Elaine is survived by her children: her son Marc Mrus and daughter-in-law Marian Fogarty, her daughter Lauren Mrus Simpson, her son Jason Mrus, and her granddaughter Vanessa Simpson Stanczak and grandson-in-law Brad Stanczak. Elaine is also survived by her brothers Joe and Jim Stefanowski and her sister Dorothy Tomberg as well as her sisters-in-law Marion Karas and Irene Mrus, along with many nieces and nephews. In lieu of flowers, please consider making donations in Elaine’s name to the National Parks Foundation at 1500 K Street NW, Suite 700, Washington, DC 20005, Constellation Hospice, Attn: Heather Billingham, 240 Indian River Road, Orange, CT 06477, and the Alzheimer’s Association, CT Chapter, at 200 Executive Blvd S #4B, Southington, CT 06489 Funeral Services for Elaine will be held on Friday, August 6, 2021 at 1:30pm at St. Mark’s Episcopal Church, 111 Oenoke Ridge, New Canaan, CT. Her internment will follow at Lakeview Cemetery, 352 Main Street, New Canaan, CT For the safety of all those attending her funeral services, please wear face coverings and maintain social distancing. To leave an expression of sympathy for Elaine’s family online, you may sign the guestbook at www.bosakfuneralhome.com or visit the funeral home Facebook page at www.facebook.com/bosakfuneralhome.

Elaine Frances (Stefanowski) Mrus passed away in her sleep at home in the early hours of Tuesday, May 25, 2021. She graced our lives for 90 years and 11 months. Elaine was born in Stamford on Tuesday, June 24, 1930 and was the first of four... View Obituary & Service Information

The family of Elaine Frances (Stefanowski) Mrus created this Life Tributes page to make it easy to share your memories.

Elaine Frances (Stefanowski) Mrus passed away in her sleep at...