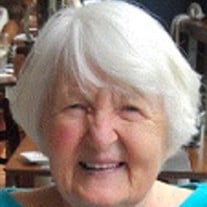 Else Laurus Coppola passed away peacefully at her home in Stamford on December 24, 2016 at the age of 97. Else was born in Bochum, Germany, daughter of Hermann and Elisabeth Katharina Heinbuch Laurus. Else was predeceased by her husband, Michael Coppola, her brother Hans, her older sister Margarethe (Grete) Hinz, and Else's identical twin sister Käthe Ortmann.Else graduated from Pyra Business School in Bochum, Germany. During the early part of WWII she was required to work at Bochumer Verein, now the Krups factory. She didn't like her experience there, so when the government was seeking women for the Air Force, Else jumped at the chance in hopes of seeing more of the world. She served as a teletypist for the German Air Force in Holland and Berlin. After the war Else spent many happy years in the office at Benzol-Verband Aral, now a subsidiary of BP. In 1954 travel and adventure beckoned, so Else immigrated with her daughter Birgit to the US and settled in Stamford. There she met and married Michael Coppola and had a daughter, Michaele.After working at Swiss Chalet bakery in New Canaan, Else managed Butterflake Bakery in Stamford for several years. She was employed at Lincoln Bank and Fairfield County Trust before joining Clairol in October 1964. She retired after 17 years in the Sales Service Dept. She enjoyed her years at Clairol and her many friends there.Else was a superb baker, and she was also an avid reader, who favored books about the American West. She looked forward to her trips to Europe and traveling with her sister Käthe. Most of all, Else was proud of her grandchildren and great grandchildren and was always thrilled to see them or hear their latest news. They will always cherish her stories about her life.In addition to daughters Birgit (Laurus) Schinell and her husband Chris, of Darien, and Michaele (Coppola) Butlein and her husband Marc, of Sarasota, FL, Else is survived by grandchildren Todd Schinell, Evan Schinell and his wife Melissa (Anderson), all of MA, Matthew Butlein, of NY, Zachary Butlein and his wife Rebecca (Senville), of RI, and Kate Butlein, of NY, and great grandsons, Theo and Cyrus Butlein, of RI. She is also survived by many relatives in the US and in Germany.A memorial celebration of her life will be held on January 6, 2017, 12 Noon, at Bosak Funeral Home, 453 Shippan Avenue, Stamford, CT.In lieu of flowers, the family suggests a donation may be made in Else's memory to either the Alzheimer's Association of CT at www.alz.org/ct or the Visiting Nurse & Hospice of Fairfield County at www.visitingnurse.net. The family has entrusted Else's funeral arrangements to Bosak Funeral Home, 453 Shippan Avenue, in Stamford. If you'd like to leave an online condolence message please visit the family guestbook.

Else Laurus Coppola passed away peacefully at her home in Stamford on December 24, 2016 at the age of 97. Else was born in Bochum, Germany, daughter of Hermann and Elisabeth Katharina Heinbuch Laurus. Else was predeceased by her husband, Michael... View Obituary & Service Information

The family of Else Laurus Coppola created this Life Tributes page to make it easy to share your memories.

Else Laurus Coppola passed away peacefully at her home in Stamford...