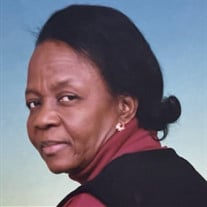 Emie “Similie, Mimi” Toussaint was born on Saturday, August 5, 1939 in Thomasbrun, Jacmel, Haiti. She is the sixth of seven children of the late Hermançe Joseph Tout and Bogel Tout. She is survived by her three children Gladys (Michel) Toussaint-Theodore, Gerald (Gilberte) Toussaint, and Maxim Toussaint as well as seven grandchildren: Esther Theodore, Roberto Theodore, Emmelynne Toussaint, Michel Theodore, Jr., Geraldine (Wilfred) Simplice, Betsy Toussaint and Gelmira Karen Theodore; and four great-grandchildren Isaiah Correia, Brycen and Ariya Simplice and Jonem Yensi. Her younger sibling Magda, her older sibling, Lenez and an innumerable number of nieces and nephews, also survive her. She is predeceased by her parents, her siblings Charline, Clement, Camita, Miguel; along with her dear friend Boss Maxi and most recently her beloved niece Jacqueline. Grandma is our cornerstone. In 1958, she relocated to Port-au-Prince, Haiti. It was there that she established herself as an entrepreneur, caretaker and community member. With limited access to education and resources, Grandma raised her three children successfully by instilling in them core values, faith and social responsibility. Although she did not have much, she gave her all and believed that her measure was in the relationships she built, the children she ushered into society and her faith in God. In her working days, her life was eclectic. She was a gifted hairdresser specializing in pressing. Her clients swore she made their hair grow. She and her daughter Gladys hired hands and worked as seamstresses who made personal clothing items that they sold to local retailers. However, she will be most remembered for her cooking and giftedness with children. She yielded love and respect from all the children she cared for. She poured her heart into all she did and people were attracted to her because of this. Grandma’s faith is at the core of who she is. She gave her life to Christ at L’Eglise de Dieu en Christ under the direction of the late Pasteur Avrilis Fleurime. In the United States, she was a faithful member of Christ Sanctified Church under the direction of Pastor Frank Luis. She worshiped the Lord well into her final days on Earth. Even while bedridden, the sound of a familiar hymn and the reading of a Psalm brought her joy. The knowledge of God’s love, gave her the patience and love that touched so many. If Grandma had food, the neighbors, their children and her distant family had food. She cooked and fed everyone. The same was true with her money. Anything she received she would save to send for clothing, tuition, groceries, medical expenses and special occasions for neighbors and family alike. She built and renovated her home and used it to serve those in need; especially in their final days. She lived with an open hand and heart. On April 29, 1994, grandma relocated to the US. She had ushered her children here and hoped to live in both Haiti and the U.S. The unfortunate situations of Haiti limited her travels. She loved her country; she loved her neighbors at Ruelle Nord’ Alexis. She was in her element there. She was always entertaining, laughing, visiting and supporting them however she could. In the US, she was limited but she took great joy in her church. Soeur Emie, danced vivaciously through worship and quietly intermingled with her pastors and fellow worshipers. “Pa bliye’m non lè’m ale.” To do so is impossible. Grandma is stitched into every one of her children and grandchildren. Gerald’s social responsiveness is her thumbprint, Gladys’ open hands are guided by her examples, and Maxime’s peaceful, simplicity and cherished community is her copyright. To her grandchildren, she remains the epitome of tangible love. Her laughter’s crescendo is ingrained in our memory, her cuisine and her simple look of pure admiration and pride will continue to fuel us. We are confident that she is resting on the Rock of her Salvation, Jesus Christ. She is greeted in heaven by so many who love and honor her. On Earth, she is missed by those who will uphold her legacy. Her family welcomes all friends and relatives on Friday, January 22nd from 4pm to 8pm at Bosak Funeral Home, 453 Shippan Avenue in Stamford, CT. A Prayer Service will be celebrated at 10am on Saturday, January 23rd at the funeral home. Her services be live streamed, for family and friends to join virtually. To attend, please select “webcast video” on Emie’s obituary at www.bosakfuneralhome.com. Her interment will follow at Fairfield Memorial Park, 230 Oaklawn Avenue, in Stamford, CT. In compliance with state mandates and the safety of all those attending her funeral services, it is mandatory to wear face coverings and maintain social distancing. If you would like to leave a condolence message online please visit the family guestbook to share memories with her family at www.bosakfuneralhome.com or www.facebook.com/bosakfuneralhome.

Emie &#8220;Similie, Mimi&#8221; Toussaint was born on Saturday, August 5, 1939 in Thomasbrun, Jacmel, Haiti. She is the sixth of seven children of the late Hermançe Joseph Tout and Bogel Tout. She is survived by her three children Gladys (Michel)... View Obituary & Service Information

The family of Emie Toussaint created this Life Tributes page to make it easy to share your memories.