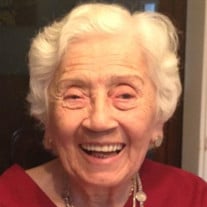 Felicia Chanduvi gained her angel wings on Friday, November 29, 2019. Felicia was born in Lima, Peru on August 31, 1926 to Rosa Cristina Rodriguez and Arturo Chanduvi. Felicia was a devout Catholic, deeply committed to her faith as well as her family. In Peru, she promised her dying mother in 1979 that she would stay by her younger sister’s side in the United States. Felicia selflessly moved to Stamford and indeed, stayed by her sister’s side until the day she died. Although Felicia never married or had biological children of her own, she was a second mother to her niece and two nephews who lovingly referred to her as Madrina. Felicia, also known as Mama Fely, also became a grandmother as her niece and nephews started their own families, doting on the children as much as she did with their parents. Felicia had a heart of gold, humble and kind, always flashing a bright smile to anyone she met and sharing her words of wisdom. Her witty humor and sassy nature was never overshadowed by her intuitive manner and ability to inevitably touch the hearts of everyone she met. Felicia is predeceased by her mother, Rosa Christina Rodriguez and siblings Ana Maria Chanduvi de Vilchez, Laura Chanduvi Chavez, Carmela Chanduvi, Herminia Chanduvi Torres, and Arturo Chanduvi. Felicia is survived her sister and brother-in-law, Betty and Luis R. Poma. Felicia is also survived by her niece and nephews and their families; Doris Poma and children, Aliana Poma and Gabriel Lyn; Luis and Elena (Aquino) Poma and their children, Amanda, Stephanie and Andy; John and Denise (Dainty) Poma and their son, Tyberius. She is also survived by numerous nieces and nephews in Lima, Peru. A memorial mass celebrating Felicia will be held on Saturday, December 14, 2019 at 10 am at St. Mary’s Catholic Church, 566 Elm Street in Stamford, CT. The family has entrusted the funeral arrangements to Bosak Funeral Home, 453 Shippan Avenue, in Stamford, CT. If you would like to leave a condolence message for the family you may visit the guestbook on bosakfuneralhome.com or on Facebook at facebook.com/bosakfuneralhome.

Felicia Chanduvi gained her angel wings on Friday, November 29, 2019. Felicia was born in Lima, Peru on August 31, 1926 to Rosa Cristina Rodriguez and Arturo Chanduvi. Felicia was a devout Catholic, deeply committed to her faith as well as... View Obituary & Service Information

The family of Felicia Chanduvi created this Life Tributes page to make it easy to share your memories.