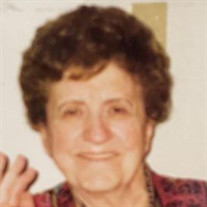 Frances P. (LaMotta) Lupinacci, 98, a nearly lifelong Stamford resident passed away on Wednesday December 8th, 2021 at Villa of Stamford, In Stamford, CT. Born on June 29th, 1923, in the Little Italy section of New York City, Frances was baptized at the Basilica of Saint Patrick’s Old Cathedral on Mulberry Street. Frances moved to Stamford with her parents, Charles (Carmelo) and Angelina (Fiore) LaMotta at a very young age. Frances attended Stamford Public Schools and later worked at Cutex Northam Warren. During World War II, Cutex and its employees did their part to support the war effort. Frances was proud to be part of this effort. After her marriage to Eugene Lupinacci Sr. in April of 1948 Frances focused on being a mother and later a grandmother. Frances and Gene lived most of their married life on Finney Lane in the West Side section of Stamford. Frances is survived by her beloved daughter, Maureen Brandi; her son, Eugene Lupinacci Jr., and his wife Phyllis; her brother, Jerry LaMotta Sr., and his wife Sandy. She also leaves behind her grandchildren whom she adored, Jeffrey Brandi, Jennifer Salvatore and her husband Rodd Sr., Nicholas Lupinacci and his wife Jeanette and Alison Chun and her husband Michael, great grandchildren Rodd Jr., Kevin and JJ Salvatore, Nicholas Jr. and Jan-Erik Lupinacci, and Autumn Chun. Besides her parents she is predeceased by her loving husband Eugene Lupinacci Sr., her sister’s Mary Ambrosio and her husband, Pat; Mildred Arrico and her husband, Charles. She is also predeceased by her son-in-law, Donald Brandi and nephew’s John Ambrosio, Frank Arrico & Charles Arrico Jr. Frances loved taking care of children, cooking Sunday gravy, soups, and stews. She enjoyed decorating for the Holidays and she had a deep affection for dogs, especially her beloved Poochie. Frances had a deep devotion to St. Jude and to Our Lady of Mount Carmel due to a favor received by her mother. She was the matriarch of our family and the last of a generation. We will miss her dearly. In lieu of flowers donations may be made in Frances’ memory to: St. Jude Children’s Hospital at www.stjude.org/donate or the Umbrella Club of Stamford at www.umbrellaclub.org . A Mass of Christian burial will be celebrated at 10:30am on Tuesday, December 14th at Sacred Heart Church, 37 Schuyler Avenue, Stamford, CT. Her entombment will follow at St. John’s Cemetery, Darien, CT. Funeral arrangements have been entrusted to Bosak Funeral Home, 453 Shippan Avenue, Stamford, CT. To leave an expression of sympathy for the family online, please sign the family’s guestbook at www.bosakfuneralhome.com or www.facebook.com/bosakfuneralhome .

The family of Frances P Lupinacci created this Life Tributes page to make it easy to share your memories.