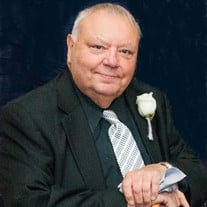 Francis K. Kirwin, 87, of Dix Hills, NY passed from this life on November 5, 2020, surrounded by loving family and friends. He was born in Worcester, MA on September 2, 1933 and later moved to Hartford, CT where he made many life-long friends at Hartford High School and as a highly decorated member of the Hartford Police Department. He served in the US Army as a member of the military police on active duty in Korea until 1955. He began his life-long career in real estate in 1962 when he moved his family to East Hartford, CT and became tax assessor for the Town of East Hartford. He served as assessor in East Hartford, Cromwell, Middlefield and other towns before he took the position of assessor in the City of Stamford in 1981 where he served for over 30 years, retiring at age 80. He was recognized as the dean of Connecticut tax assessors. He was the late Senator Thomas Dodd’s driver, supporter and friend. Frank was active in Democratic party politics, especially in election campaigns for Senator Christopher Dodd, and Governors Ella Grasso and William O’Neill. Frank was a mentor to many and showed his love for his friends and family with a blend of loyalty and humor. He touched hearts in a way that will be remembered forever. Frank was always in the front row for the accomplishments and milestones of his many friends and family members. He wanted to be the first one to hold his grandchildren and great-grandchildren when they were born and attended many sporting events and ceremonies to cheer them on. He loved the NY Yankees, UConn basketball and was a life-long fan of NASCAR cup and modified tour racing. Frank was predeceased by his parents and sisters. He leaves behind his wife of 39 years, Gloria. He is survived by his four daughters, Jill Spineti and son-in-law Joseph of Manchester, CT; Darcy LaBrosse and son-in-law Jacques of Merrimack, NH; Lynn Smith and son-in-law Brian of East Hartford, CT and Alison Pires and son-in-law, Paul, of Tolland, CT. He also leaves his two stepsons, Ronald Wright and Gina of Ridge, NY and Corey Wright and daughter-in-law Brigette of Buford, GA. He was blessed by the love of his many grandchildren, Brian Jr. and Russell Smith, Guy and Kristy Spineti, Aubin and Grant LaBrosse, Nina and Nathan Peck, Paul and Coral Pires, Claudia and Alex Pires, Michelle, Morgan, Matthew and Ariana Wright and Kayleigh and Shelby Wright, and great-grandchildren Joseph and Dominic Spineti, Logan and Charlotte Pires and Silas Duncan and special grandson Andrew Friend. He also leaves the mother of his children, Patricia Kirwin. Frank was loved by so many friends and family members who will miss his love, generosity and sense of humor. In his honor, please share a story or a memory with others so that his legacy lives on. In lieu of flowers, memorial donations may be made to Paralyzed Veterans of America, New England Chapter, 1208 VFW Parkway, West Roxbury, MA 02132. Friends and family are invited to a visitation on Sunday, November 15, 2020 from 2-5 pm at Bosak Funeral Home, 453 Shippan Avenue in Stamford, CT. The funeral and burial services will be private and Frank will receive military honors. In compliance with state mandates and the safety of all those attending the services, it is mandatory to wear face coverings and maintain social distancing. A celebration of Frank’s life will also be held at a future date when we can gather to honor a man who “Did it My Way.” If you would like to leave a condolence message online please visit the family guestbook to share memories with his family at www.bosakfuneralhome.com or www.facebook.com/bosakfuneralhome.

Francis K. Kirwin, 87, of Dix Hills, NY passed from this life on November 5, 2020, surrounded by loving family and friends. He was born in Worcester, MA on September 2, 1933 and later moved to Hartford, CT where he made many life-long friends... View Obituary & Service Information

The family of Francis K. Kirwin created this Life Tributes page to make it easy to share your memories.