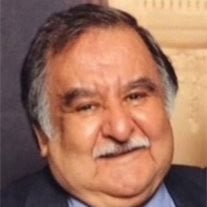 Life Legacy J.L. Francisco Rodriguez, 77, a Stamford resident of over 35 years, passed away May 16, 2016 at Springdale Assisted Living in Mesa, AZ. Francisco was born on June 20, 1938 in Pachuca, Mexico to Natalia Rodriguez and Guadalupe Rodriguez.Don Francisco, was also known as Pancho to his family, and nicknamed "El Pichon" by his friends in Mexico. He came to Stamford, CT with his wife, Teresa Rodriguez soon after they were married. In the U.S., Don Francisco began working in the restaurant industry, settling at Brocks as a sous chef for over 15 years. Later in his career he transitioned to Pitney Bowes, and worked as a machinist. Francisco and his wife lived a humble, but very happy and loving life in CT before retiring and moving to Mesa, AZ in May 2010.Don Francisco enjoyed everything BIG. He made great dishes at home, transforming the simplest of foods, to extraordinary experiences. Francisco was not only a cheese connoisseur, but also a foodie at heart, --never giving up a biscuit or a donut. His enthusiasm and fun loving spirit was always present at social events. He was vivid, lively, and engaging. He enjoyed dancing, and listening to an eclectic mix of genres like Mexican Ballads, Sinatra, and Blues. Francisco also loved a good cologne, as he always took meticulous care of his look.Don Pancho's laugh gave you comfort; his smile gave you a warm insight into his playful personality. Notwithstanding, Francisco was an incredibly hard worker that constantly focused on the well being of his kids and his wife. His life was a constant example of struggle, determination, and perseverance; one that stressed education and hard work. He lived his life, as he put it, 'A Todo Dar!' Francisco is survived by his Brothers and Sisters, Jose Rafael Rodriguez of Torrington, CT, Teresa, and Antonio Rodriguez of Pachuca, Mexico, Daughter and son-in-law, Liliana and Juan Carlos Vargas of Mesa AZ; Son and daughter in law, Frank and Claudia Rodriguez of Stamford; Grandchildren, Sebastian and Alexander Vargas. Also surviving are the many extended relatives, nieces, and nephews from CT and Mexico. He is preceded in death by his wife, M. Teresa Rodriguez.Francisco's family will receive the sympathy and condolences of friends and family on Saturday, May 28th from 9am to 1pm at Bosak Funeral Home, 453 Shippan Avenue, Stamford, CT 06902. A prayer service will be officiated by the Rev. Fr. Rolando Torres and will take place at 10am. The family has entrusted the funeral arrangements to Bosak Funeral Home, 453 Shippan Avenue, in Stamford. If you care to leave a condolence message online visit the family guestbook at www.bosakfuneralhome.com.

Life Legacy J.L. Francisco Rodriguez, 77, a Stamford resident of over 35 years, passed away May 16, 2016 at Springdale Assisted Living in Mesa, AZ. Francisco was born on June 20, 1938 in Pachuca, Mexico to Natalia Rodriguez and Guadalupe Rodriguez.Don... View Obituary & Service Information

The family of Francisco Rodriguez created this Life Tributes page to make it easy to share your memories.