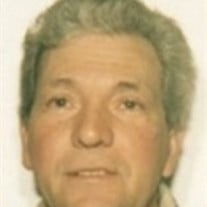 Franco Anthony Capocci, Sr., 69, of Norwalk, CT, died on Tuesday, November 24, 2015, at his home after a short illness. Born in Settefrati, Frosinone, Italy, on July 14, 1946, Franco and his family immigrated to Stamford, CT, in 1959. He was the son of the late Marziano Luciano Capocci and Maria (Frattaroli) Capocci. Franco worked at Pitney Bowes in Stamford before becoming a carpenter's apprentice. He was proud of his 46-year membership with Carpenter's Local Union 210. He worked on many of the buildings in Stamford and Norwalk, including the Stamford Town Mall, Mianus River bridge, and most recently the new addition of Stamford Hospital. Franco was a longtime member of the Settefratese Social Club in Stamford and a member of Pawling, NY Fish and Game Association. He was an avid hunter and outdoorsman. Franco is survived by his wife, Diane Fasoli Capocci, having met 50 years ago. He is also survived by his son, Franco Capocci, Jr. and his wife Jennifer od Harrison, NY and two granddaughters. Adrianna Nicole and Alexa Bella. Franco was preceded in death by and infant daughter, Tina Marie. Also surviving are two sisters, Fernanda (Carlo) Zappia and Anna Capocci of Wingdale, NY and many nieces and nephews. The family will receive relatives and friendson Saturday, November 28, 2015 from 11a.m. to 1p.m. at Bosak Funeral Home, 453 Shippan Avenue, Stamford, CT 06902. A memorial service will begin at 1p.m. also at the funeral home. In lieu of flowers, donations in Franco's memory may be made to the American Cancer Society , P.O. Box 22478, Oklahoma City, OK 73123 or online at www.cancer.org/donate. The family has entrusted the funeral arrangements to Bosak Funeral Home, 453 Shippan Avenue, in Stamford.

The family of Franco Anthony Capocci created this Life Tributes page to make it easy to share your memories.