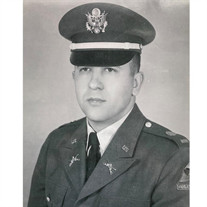 Frank W. LiVolsi, Jr., a proud veteran, and father, passed away peacefully on February 27, 2022, surrounded by his loving family. Frank was born, raised, and educated in Stamford, CT. He was the son of Frank W. LiVolsi Sr., and Rose (Genevose) LiVolsi. Frank was a proud Stamford High School Black Knight and played varsity football and baseball under Coach Paul Kuczo. He holds the distinction of scoring a touchdown the first two times he carried the ball. Frank often referred to his childhood as “the absolute best” and cherished his lifelong friends known as “The Boys of ‘56.” The Boys remain close to this day and often gathered to recount their youthful exploits, much to Frank’s enjoyment. Frank was a distinguished military graduate from Pennsylvania Military College where he was commissioned a second lieutenant in the US Army. He deferred active duty to attend law school and graduated in 1965 from Fordham University School of Law. After graduation, he reported for active duty at Fort Knox, KY, the “Home of Armor.” His initial assignment was company commander for new recruits and was later assigned to the Judge Advocate General’s Corps (JAG) where he tried over 200 cases. He received orders to report to the 11th Armed Cavalry Regiment at Fort Meade MD which was deployed to the Republic of Vietnam. He served as a platoon leader with A Troop, 11th Armored Cavalry Regiment (the Blackhorse). Frank was promoted to captain after 12 months of active duty. Frank was recognized for his valor in the field several times, receiving the Purple Heart, Bronze Star with Oakleaf Cluster, Army Commendation Medal for Valor, Republic of Vietnam Gallantry Cross with Palm, National Defense Service Medal, Vietnam Service Medal, Vietnam Campaign medal. Frank met Nancy Sinatra when he was assigned to accompany her during her USO Tour in Vietnam and the two have remained friends. When Frank returned to Stamford he was elected to the Board of Representatives and was subsequently appointed Assistant Corporation Counsel. Frank practiced law in Stamford for over 50 years, with his trusted paralegal, Camille Sileo, at his side. His most celebrated cases include leading a rent strike for Coleman Towers, requiring the City to collect refuse from condominium associations, and requiring the City to allow females and those under 5’7” tall to become police officers in the City of Stamford. In 1992, at Frank’s request, the Commander of Forces in Vietnam, General William Westmoreland, came to Stamford to dedicate a flagpole donated by the Stamford Exchange Club. Frank has received many awards and honors through the years. He proudly served on the Board of the Salvation Army and the Stamford Girls Club and, was honored as Grand Marshal in the Memorial Day Parade. Frank is survived by his loving wife of 60 years Bridgenne (Querro), his daughter and former law partner Amy LiVolsi, her sons C. Frank and Benjamin Gragg, his daughter and son-in-law Bridgenne and Joseph Mallozzi, their children Joseph Jr. and Madison Amy, and his sister Rosemary Bucci. In lieu of flowers, please consider a donation in his memory to St. Jude Children Research Hospital ( www.stjude.org ) Visitation will be held on Thursday, March 3rd from 4pm to 8pm at Bosak Funeral Home, 453 Shippan Avenue, in Stamford, CT. His services will be private. For the safety of all, please wear face coverings. To leave an expression of sympathy, please sign the family’s guestbook at www.bosakfuneralhome.com or www.facebook.com/bosakfuneralhome.

Frank W. LiVolsi, Jr., a proud veteran, and father, passed away peacefully on February 27, 2022, surrounded by his loving family. Frank was born, raised, and educated in Stamford, CT. He was the son of Frank W. LiVolsi Sr., and Rose (Genevose)... View Obituary & Service Information

The family of Frank W. LiVolsi Jr. created this Life Tributes page to make it easy to share your memories.