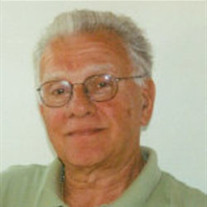 Frank A. Magnoli, died peacefully on Sunday, December 27, 2015 in Stamford, CT, at the age of 80. He was born in Stamford, CT on June 14, 1935 (Flag Day) and was the only child of Natale and Anna Magnoli. Frank’s mother passed and from an infant, was raised by Anna’s sister, Natalie Mardi. Frank was a lifelong resident of Stamford and was raised in the tight knit community of the South end, where everyone was family! Frank apprenticed alongside his father at Excelsior Hardware and began courting the love of his life Filomena (Phyllis) Sorbo and so began their storybook life. After marrying Phyllis, they purchased their new home in “the country” (Newfield area), where they lived for the next 55 years while raising their two sons Frank Jr. and Michael. Frank became a talented tool and die craftsman and continued to work at Excelsior for 30 years, then with Accurate Tool and Die until his retirement. He was the happiest when surrounded by family, including his wife’s larger extended Sorbo family. His many nieces and nephews and their children love their Uncle Frank! The stories of family gatherings throughout the years were endless, especially the stories of the Vermont “hunting” trips that were a yearly event (but they never seemed to come home with any deer (?). Frank loved to tell stories of his childhood and growing up in the old days of Stamford down the South end! He was a kind, loving and gentle man that could often be seen tinkering in his shed, building model trucks and dollhouses for his grandkids. He was an avid collector of pocket knives and often hand crafted his own to add to his collection. He is most notable, however, for making his delicious pizzagaina that has become a yearly tradition with family and friends calling to see if the pies are ready. Faith and Family were his priority. Frank is survived by his wife of 60 years, Filomena (Phyllis) Sorbo Magnoli. His eldest son Frank Jr.and his daughter Josephina (Joey) Daniello-Magnoli from Hilton Head, SC. His younger son Michael and his wife Jennifer Sileo Magnoli and their two children, Joseph and Jessica, Norwalk, CT. Calling hours will be held TONIGHT, Wednesday, December 30th from 4pm to 8pm at the Bosak Funeral Home, 453 Shippan Ave, Stamford, CT. A Mass of Christian burial will be celebrated on Thursday, December 31st at 10am at St. Bridget Church, 278 Strawberry Hill Ave, Stamford, CT. Interment will follow at St. John's Cemetery in Darien, CT. If you would like to leave an expression of sympathy for the family online, you may sign the guestbook at www.bosakfuneralhome.com or visit the funeral home facebook page at www.facebook.com/bosakfuneralhome to share memories with his family.

The family of Frank A Magnoli created this Life Tributes page to make it easy to share your memories.