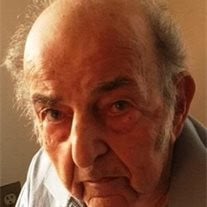 Frank Albert Marro, 92 passed away peacefully on July 11, 2016 at Stamford Hospital. He was born and raised in Stamford to Mamie Picciano and Frank A. Marro. He was pre-deceased by his wife Marilyn Duquemin, brothers Anthony, Dominick, Joseph, Gerry, and Bobby Marro, two sisters Helen Marro and Ann Knapp and by two nephews. Bobby Marro and John Knapp. He is survived by one sister Eleanor Palmer of Cedar City, Utah; his fiancé Irene Thompson of Stamford; by his four children, Pat Ormsby, Kathi Cavanna, Tom Marro, all of Stamford and Frank Marro (Carol) of Savannah, Georgia; seven grandchildren, Dan Ormsby (Ashley) Stamford, Diana Boynton (Chris) of Weston, CT, Terri and Peter Cavanna of Stamford, Jennifer Gale (Michael) of Silver Spring, Maryland and Benjamin Marro of New Milford, CT and Christopher Marro of Warren, CT; by five great-grandchildren, Ryan Boynton of Weston, Isabelle, Jack, Jayden and Izayah Ormsby of Stamford; and by several nieces and nephews. Frank graduated from Stamford High School. He served in WWII where he was a Sergeant, serving 23 months with the 150th Engineer Battalion in Normandy, Northern France, Ardennes, Rhineland, and Central Europe. After his service, he came back to Stamford and worked for Conde Nast, Combustion Engineering, Muzzio Brothers Boatyard in Stamford, and the Stamford Jewish Center. He was Building Superintendent at Morgan Manor Apartments, Regency Tower Apartments and Buckingham Condominiums, Sexton at the Zion Lutheran Church on Glenbrook Road and Maintenance Supervisor at Valeur Building on Main Street. He loved watching sports, especially the NY Yankees and the UCONN Huskies women’s basketball teams. He will be greatly missed by all who knew him. Family will receive friends from 4pm to 7pm on Friday, July 15th at the Bosak Funeral Home, 453 Shippan Avenue, in Stamford. A funeral service will be celebrated at 10am on Saturday, July 16th at the funeral home. Burial will be held private. If you would like to leave an expression of sympathy for the family online, please sign the guestbook at www.bosakfuneralhome.com or visit the funeral home Facebook page at www.facebook.com/bosakfuneralhome to share memories of him with his family.

Frank Albert Marro, 92 passed away peacefully on July 11, 2016 at Stamford Hospital. He was born and raised in Stamford to Mamie Picciano and Frank A. Marro. He was pre-deceased by his wife Marilyn Duquemin, brothers Anthony, Dominick, Joseph,... View Obituary & Service Information

The family of Frank Albert Marro created this Life Tributes page to make it easy to share your memories.