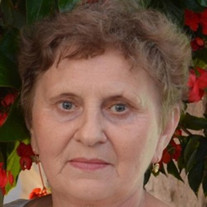 Life Legacy Galyna Rabyk, age 70, of Wilton, Connecticut, passed away on Wednesday, October 4, 2017 at Norwalk Hospital after a courageous battle with cancer. She was the beloved wife of Yaroslav Rabyk, treasured mother of Iryna Pshyk and greatly loved grandmother of Anastasiya and Daniel Pshyk. Galyna was born in Ukraine, July 27, 1947. She was the daughter of Volodymyr and Katherine Budnyi. She is survived by her older sister Maria Skorohoda. Galyna worked her whole life with kids, she was a Kindergarten teacher for over 30 years in Ukraine. In the United States she still worked with kids, as a teacher’s assistant in the School of Ukrainian Studies in Stamford. She came to the United States in 2010 with her husband, to join her family. She had two kids, Volodymyr and Iryna. Galyna is preceded in death by her sister Natalie Budna, her brother, her parents- Volodymyr and Katherine Budnyi and unfortunately, the death of her son Volodymyr Rabyk. She left behind, her husband, her daughter Iryna Pshyk, her 2 grandchildren Daniel (4) and Anastasiya Pshyk (14). She dedicated her whole life to her family, her work and just on being the best mom and grandma in the world. She will be greatly missed by many, and she won’t be forgotten. Anyone who has ever met her, knows that she was the strongest, bravest and kindest. She lived her life through her family and her family lived through her. After being diagnosed with stage four cervical cancer, she began to seek treatment. With the days being limited, and the cancer spreading without stop, she was given around 3 months left to live about a week before her passing. The death was very quick and unexpected, she died due to organ failure. The wake and service will be held on October 5th, 2017 at the Bosak Funeral Home and Cremation at 453 Shippan Ave, Stamford, CT 06902 7 to 11 pm. At Galyna’s request, the funeral itself, will be held in Ukraine. May she rest forever in peace.

Life Legacy Galyna Rabyk, age 70, of Wilton, Connecticut, passed away on Wednesday, October 4, 2017 at Norwalk Hospital after a courageous battle with cancer. She was the beloved wife of Yaroslav Rabyk, treasured mother of Iryna Pshyk and greatly... View Obituary & Service Information

The family of Galyna Rabyk created this Life Tributes page to make it easy to share your memories.