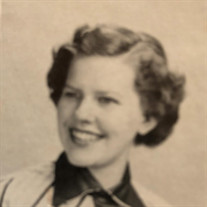 Georgina Fickett French, 85, of Terryville CT, and former longtime Stamford resident, passed away peacefully on the morning of February 13, 2020 surrounded by her family. Georgina was born in Greenwich CT. on December 9, 1934, daughter of the late Lawrence and Mary Fickett. Georgina, the eldest of eight, grew up on Bolling Farm in Greenwich, and later moved to the house built by her father in the Turn of River area of Stamford in 1947. After her father passed away, Georgina helped to raise her younger siblings. She attended Stamford High School, and then worked at AT&T as a telephone operator for many years before becoming a devoted mother and homemaker. Though she enjoyed hobbies of sewing and macramé, she cherished time spent with family and reminiscing with siblings about their childhood on the farm. Georgina is survived by her two children, John R. French and his wife Karen of Terryville CT, and Lynn Arnow and her husband Kenny of Stamford CT. She is also survived by her sisters Joan Fickett of Terryville, Susan Nardelli and her husband Tony of Milton DE, her brothers Robert Fickett and his wife Barbara of Wells ME, David (Woody) Fickett and his wife Karen of Sherman, William Fickett of Terryville, several nieces, a nephew, and her former husband, John French of Thomaston. Besides her parents, Georgina is predeceased by her brothers Russell and Phillip Fickett. “Grams” will be profoundly missed by her much-loved grandchildren, Nicole Lounsbury and Melissa French, Michael, Amy and Morgan Arnow, and four great-grandchildren, Riann and Clark, and Sean and Ryan. A Celebration of Life will be held in the spring. The family wishes to thank HRA of Bristol, the physicians and staff of Stamford Hospital, Constellation Homecare & Hospice, and Bridget Associates, LLC for their wonderful care and compassion. The family has entrusted the funeral arrangements to Bosak Funeral Home, 453 Shippan Avenue, in Stamford, CT. If you would like to leave a condolence message for the family you may visit the guestbook on bosakfuneralhome.com or on Facebook at facebook.com/bosakfuneralhome.

Georgina Fickett French, 85, of Terryville CT, and former longtime Stamford resident, passed away peacefully on the morning of February 13, 2020 surrounded by her family. Georgina was born in Greenwich CT. on December 9, 1934, daughter of the... View Obituary & Service Information

The family of Georgina Fickett French created this Life Tributes page to make it easy to share your memories.