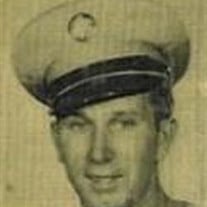 Gerald C. Wood, 83, lifelong resident of Stamford, CT, passed away at Stamford Hospital on the morning of Sunday, November 30, 2014 with his wife and son by his side.  Gerald was born January 12, 1931, and was one of eight children born to the late Kenneth and Florence (Weaver) Wood. Gerald grew up in Stamford and attended Stamford public schools.  In 1950, Gerald enlisted in the United States Army where he served in Korea with the 1st Cavalry Division, 70th Heavy Tank Battalion.  A true American hero, he fought in five out of the six major battles in Korea as a Tank Commander.  Gerald advanced to Sergeant 1st Class and was honorably discharged. He was extremely proud of his service to country and viewed it as being his privilege and honor to serve. Following his discharge from the service, Gerald returned home to Stamford and began his career as a book binder, initially with Conde Nast Publications and most recently with Thrush Press, and, more importantly, met and married the love of his life, Barbara Koproski. Gerald was a member of Veterans of Foreign Wars, post 9617 and the American Legion, post 3.  He loved the outdoors, gardening, and building things. He also enjoyed going to Vermont on a regular basis where he liked to relax, work and play. Although he was a man of few words, Gerald loved his family immensely and enjoyed being surrounded by his numerous nieces, nephews and friends for whom he cared deeply. He was also a longtime parishioner of St. Leo Church in Stamford where he was loyal to both his faith and his church. Gerald is survived by his beloved wife of 59 years, Barbara (Koproski) Wood, and his son and daughter-in-law, Jason and Kelly Wood, of Stamford.  He is also survived by three brothers; Barry Wood (Debra) of Greenwich, CT, Donald Wood (Ella) of Montana, Gary Wood (Shirley) of Florida, and two sisters; Theodora DeLeo (Peter) of Florida and Cynthia Spiers of Florida. In addition to his parents, Gerald was preceded in death by his brothers Kenneth and Richard Wood. The Wood family will receive the condolences of friends and family on Wednesday, December 3rd from 4p.m. to 8p.m. at Bosak Funeral Home, 453 Shippan Avenue, Stamford, CT 06902.  A Mass of Christian Burial will be celebrated on Thursday, December 4th at 11 a.m. at St. Leo Church, 24 Roxbury Rd.., in Stamford.  The interment and committal service will immediately follow mass at Queen of Peace R.C. Cemetery in Stamford. The family has entrusted the funeral arrangements to Bosak Funeral Home, 453 Shippan Avenue, in Stamford.  If you care to leave an online condolence message please visit the family guestbook on www.bosakfuneralhome.com or on the funeral home Facebook page at www.facebook.com/bosakfuneralhome.

Gerald C. Wood, 83, lifelong resident of Stamford, CT, passed away at Stamford Hospital on the morning of Sunday, November 30, 2014 with his wife and son by his side.  Gerald was born January 12, 1931, and was one of eight children born to the... View Obituary & Service Information

The family of Gerald C Wood created this Life Tributes page to make it easy to share your memories.