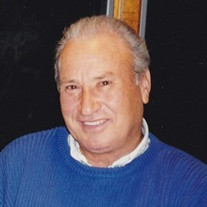 Giuseppe ("Joe") Antonio Pollifrone, passed away suddenly on Saturday evening after a short illness. He was 82. Giuseppe was a beloved husband to his wife Maria Rosa of fifty-three years, proud Papa to his three daughters, and a doting Nonno to his four grandchildren. His love for his family was only matched by his generosity to them and to all. Time with family and friends was what he valued most. There was no game that he would not play with his grandchildren -- as there was no friend or relative that he would not lend a helping hand to. He was a consummate host, who always made sure he had full stock of everyone’s favorites. He regaled many with his entertaining stories, had a great sense of humor, and was always one that could take a good ribbing. He was born on September 16, 1933 to Nicola and Maria Francesca Rocca Pollifrone in the village of San Nicola D’Ardore located in Reggio Calabria, Italy. He was the youngest of three children. At the age of 16 he moved to Torino where he began a masonry apprenticeship. In 1970 he moved his family to Stamford where he built a number of homes with Maria Rosa as a partner. They were a strong team as well as best friends. Self- taught, he had an innate sense of the land and could turn the least desirable parcel into something that was pleasing. He was a demanding taskmaster, however he never asked anyone to work harder than he himself did. Up to the age of 70, he would exhaust younger men trying to keep up with him. He was a hardworking man with great vision and talent. He is survived by his wife Maria Rosa, and his daughters: Mirella Harrison of Greenwich and Stamford and her husband Frank, and his grandchildren Madeline and John ("Jack"); Laura Pollifrone-Lauraya of Napa, CA and her husband Rick; and Roseann Munrow of Wilton and her husband Jeff and his grandchildren Michael and Julia. His sons-in-law were very dear to him and he treated them as if they were his own. His sister Ida still lives in San Nicola, also surviving are his beloved nieces, nephew, and cousins living in San Nicola and Torino. He was predeceased by his brother Vincenzo. A mass of Christian burial will be held at St. Catherine of Siena Church located at 4 Riverside Avenue in Riverside on Friday, April 1st at 11am. Visitation will be held at the church from 10am to 11am. A private burial to St. Mary’s Cemetery will follow. In lieu of flowers, the family asks that you consider making a memorial donation to the Juvenile Diabetes Research Foundation, 200 Connecticut Ave # 5, Norwalk, CT 06854 or the American Cancer Society. If you would like to leave an expression of sympathy for the family online, you may sign the guestbook at www.bosakfuneralhome.com or visit the funeral home facebook page at www.facebook.com/bosakfuneralhome to share memories with his family.

Giuseppe ("Joe") Antonio Pollifrone, passed away suddenly on Saturday evening after a short illness. He was 82. Giuseppe was a beloved husband to his wife Maria Rosa of fifty-three years, proud Papa to his three daughters, and a doting Nonno... View Obituary & Service Information

The family of Giuseppe Antonio Pollifrone created this Life Tributes page to make it easy to share your memories.