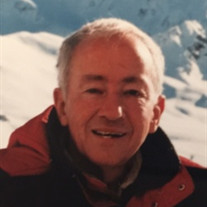 Harald Goering Jr. of Darien, Connecticut passed away peacefully on January 22, 2016 at Stamford Hospital with his family by his side. He was 82. Harald was born in Nurnberg, Germany on February 2, 1933 to Marga and Harald Goering. He was educated in Germany at Melanchton-Gymnasium in Nurnberg. He later took a beer-making apprenticeship at Brauhaus Nurnberg. He then received his brew master degree from Doemens School of Beer Brewing in Munich. Throughout his career, he worked in Chile, Spain, Belgium and Denmark. In 1959, he was sent to New York to re-launch John Barth Inc., a company specializing in hops and brewery supplies. In 1974, he became the owner and chairman of K.H. McClure and Co. Inc., a Stamford-based import and export company. He also held a seat on the Cocoa, Coffee and Sugar Exchange for 12 years. As part of the Republican Senatorial Trust Committee, Harald participated in the 1980 election campaign of President Ronald Reagan. He was a big ice hockey fan, holding season tickets to the Hartford Whalers and later the New York Rangers. In addition, he had season tickets to the NY Giants. Harald was an avid traveler and adventure seeker who enjoyed taking family trips to Africa. He was fluent in German, Spanish, French and English. He is survived by his wife of 46 years Sabine Goering, his son Lamar and his daughter-in-law Laura. He is also survived by his sister Dagmar von Schack of Bad Waldsee, Germany. Memorial services will be private. In lieu of flowers, donations can be made in his name to the: Stamford Hospital Foundation, 1351 Washington Blvd., Suite 202 Stamford, CT 06902. If you would like to leave an expression of sympathy for the family online, you may sign the guestbook at www.bosakfuneralhome.com or visit the funeral home facebook page at www.facebook.com/bosakfuneralhome to share memories with his family.

Harald Goering Jr. of Darien, Connecticut passed away peacefully on January 22, 2016 at Stamford Hospital with his family by his side. He was 82. Harald was born in Nurnberg, Germany on February 2, 1933 to Marga and Harald Goering. He was educated... View Obituary & Service Information

The family of Harald Goering created this Life Tributes page to make it easy to share your memories.