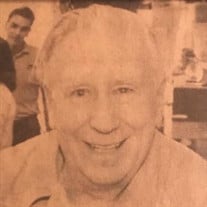 Harold Grant O’Donnell Jr., aka Mr. Reddi Rooster, passed away peacefully in the Springdale, CT home he grew up in, on May 12th at the age of 93, with his beloved wife of 55 years Rose Servidio O’Donnell and granddaughter, Danielle Frangione, by his side. His sons, Keith and Randy O’Donnell were unfortunately unable to travel safely from Florida where they reside, but were able to share several moments with him over the phone in his final days. Harold was born in Springdale, CT on December 18th, 1926. He was the only child of Mother Vera Plumley O’Donnell and father, poet Harold Grant O’Donnell, Sr. Although he did not have much opportunity for a formal education, he won a scholarship for period-popular mail order art lessons. In 1944, he set aside his art to serve his country in the US army. During the war he was stationed for a period of time in both Hiroshima and Nagasaki. An indelible experience rivaled only by his resilience of character. At the end of the war, Harold returned to Springdale where he began work at Condé Nast, where he, alongside his mother, who worked as paymaster, was able to put his artistic abilities to use and proudly became one of their star engravers. Then in 1965, Harold and Rose started what became the Reddi Rooster, the well-known Italian-American deli and catering establishment on High Ridge Road. There they showcased Rose’s home cooking and Harold’s skills with fried chicken and barbecue ribs, fostering the Reddi Rooster’s well-earned reputation and legacy that still stands today. They loved being able to spend every day together and with longtime employees who became extended family and so many customers as friends. Harold spent his retirement years in his garden taking special pride in his vegetables and flowers. Waiting with amusement each spring for Keith to come so he could boss him around in the garden. “Don’t plant that there! What’s wrong with you!” What a great sense of humor he had. A devoted New York Mets fan, he cherished going to the games with Randy and the “Highview Ave” gang. Rose’s daughter Carol Ann Panapada and their many grandchildren are there to comfort Rose. Randy, Keith, and his children Melanie and Carolina are forever grateful to Rose for her special love and care for Harold in his final years and their entire marriage. Harold’s family asks that you plant a tree in his memory or remember him when a cardinal sings. Harold was known as a devoted and grateful husband, caring, loving father, wonderful grandfather, and a great man. He will be remembered, and he will be missed. Funeral and burial will be held private for immediate family due to COVID-19 restrictions. The family has entrusted the funeral arrangements to Bosak Funeral Home, 453 Shippan Avenue, in Stamford, CT. To leave a condolence message for the family you may visit the guestbook at www.bosakfuneralhome.com or on Facebook.com/bosakfuneralhome.

Harold Grant O&#8217;Donnell Jr., aka Mr. Reddi Rooster, passed away peacefully in the Springdale, CT home he grew up in, on May 12th at the age of 93, with his beloved wife of 55 years Rose Servidio O&#8217;Donnell and granddaughter, Danielle... View Obituary & Service Information

The family of Harold Grant O'Donnell Jr. created this Life Tributes page to make it easy to share your memories.