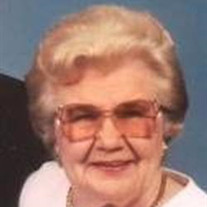 Helen Babula, family matriarch, was born in Stamford, CT on December 15, 1916 to Anatazy and Adela Grocka Zajkowski and passed away on January 14, 2015 at the age of 98.  At the age of two her family returned to Poland where Helen was educated through her teens.  In 1935 her parents sent Helen and her eldest brother, Ziggy, back to America fearful of the borders closing due to future war.  The two teenagers, eighteen and twenty, settled in NJ for a few years with an uncle and his family of four children.  As time passed, Helen moved to Stamford, CT where she met her beloved husband, Stanley Babula. They married in 1939 at Holy Name Church in Stamford, CT and enjoyed sixty-one years of marriage before his death in 2000.  After raising two daughters, Helen worked at Gimbels as a sales associate for eighteen years until retirement in 1977.  In 1985 they moved to Peachtree City, GA to be closer to family and enjoy a warmer climate.  There they made new friends and were active in the Pioneer Club and Holy Trinity Church. She was preceded in death by her parents, brothers, Ziggy and Al Zajkowski, and her husband.  Survivors include a brother, Bernie Zajkowski of Newark, NJ, daughters, Jan Bennett of Muscle Shoals, AL and Ceil Breitwieser of Dallas, TX.  She has six grandchildren and thirteen great-grandchildren. Visitation will be Friday, January 23rd from 9:30 am to 10:30am at the Bosak Funeral Home, 453 Shippan Avenue, in Stamford, CT.  A Mass of Christian burial will be celebrated at 11am at the Holy Name of Jesus Church, 369 Washington Blvd, in Stamford, CT.  Interment will follow at St John Roman Catholic Cemetery in Darien, CT to unite Helen with her beloved husband, Stanley. Thanks to all the caregivers from HomeInstead who have helped Helen continue to live her life to the fullest.  In lieu of flowers, Memorial contributions can be made to Pope John Paul II Cultural Center, P.O. Box 96486, Washington, DC 20077-7424 or to a charity of your choice.  The Babula family has entrusted the funeral arrangements to Bosak Funeral Home, 453 Shippan Avenue, Stamford, CT. If you would like to leave an expression of sympathy for the family online, you may sign the guestbook at www.bosakfuneralhome.com or visit the funeral home Facebook page at www.facebook.com/bosakfuneralhome to share memories of Mrs. Babula with her family.

Helen Babula, family matriarch, was born in Stamford, CT on December 15, 1916 to Anatazy and Adela Grocka Zajkowski and passed away on January 14, 2015 at the age of 98.  At the age of two her family returned to Poland where Helen was educated... View Obituary & Service Information

The family of Helen Babula created this Life Tributes page to make it easy to share your memories.