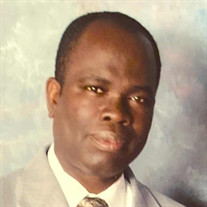 Henri Duquéné was born on March 4, 1952 in Desdunes, Haiti. He was the first of eight children born to Immacula and Joseph Duquéné. Even as a young man Henri showed himself to be a serious individual. This became more evident at the time of... View Obituary & Service Information

The family of Henri Duquene created this Life Tributes page to make it easy to share your memories.