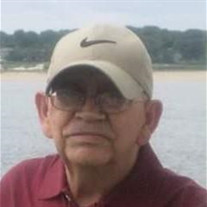 Huberto Escobar, 86, of Stamford, passed away peacefully on February 5, 2020 surrounded by his family. He was born in Betulia, Colombia to the late Martin and Martina Escobar on December 13, 1933. He married his loving wife, Margarita, on June 6, 1956 and together they enjoyed 63 years of marriage. In 1974, Huberto moved to the United States, first living in New York then settling in Stamford with his family in 1978. He retired from Stamford Hospital in 1999 after 20 years of service. Huberto was a loving family man first and foremost. His wife, children, and grandchildren were the most important things in his life. He treasured every moment spent with family and loved nothing more than to spoil his grandkids with all the junk food they can eat. Furthermore, he was an avid reader who loved History and Politics. His sense of humor was always at full display during family gatherings or simply to lighten the mood. His kind and welcoming nature was ever present when he greeted you with a huge smile. Huberto is survived by his loving wife Margarita Escobar: his daughters Maria Reyes, Margarita (Jorge) Arenas, and his son Rafael (Barbara) Escobar: his grandchildren Katie (Juan) Pabon, Christopher Arenas, Stephen Arenas, Kaiden Escobar, and Payton Escobar: his great grandchild Nicolas Pabon: his brother Gonzalo Escobar and sister Cecilia Escobar. Dad, we hope you’re enjoying your time with your mom! Family will receive relatives and friends on Wednesday, February 12th from 4pm to 6:30pm at Bosak Funeral Home, 453 Shippan Avenue, Stamford, CT. A Mass of Christian Burial will be celebrated on Thursday, February 13th at 10am at The Basilica of Saint John the Evangelist, 279 Atlantic St, Stamford, CT. His interment will follow at Fairfield Memorial Park Cemetery, 230 Oaklawn Ave, Stamford, CT. The family has entrusted the funeral arrangements to Bosak Funeral Home, 453 Shippan Avenue, in Stamford, CT. If you would like to leave a condolence message for the family you may visit the guestbook on bosakfuneralhome.com or on Facebook at facebook.com/bosakfuneralhome.

Huberto Escobar, 86, of Stamford, passed away peacefully on February 5, 2020 surrounded by his family. He was born in Betulia, Colombia to the late Martin and Martina Escobar on December 13, 1933. He married his loving wife, Margarita, on June... View Obituary & Service Information

The family of Huberto Escobar created this Life Tributes page to make it easy to share your memories.

Huberto Escobar, 86, of Stamford, passed away peacefully on February...