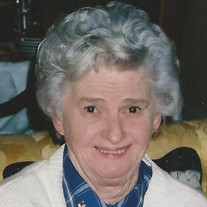 Irene Francis Interlandi died peacefully on Friday, January 24, 2020. She was surrounded by her loving husband Joseph, her beloved family, and her friend and caregiver when she left us. She will be deeply missed by family and friends. Irene Francis Zurkowski was born on January 29, 1928 to the late William and Alexandra Zurkowski, and was one of eight children. She grew up on Elmcroft Road in the South End of Stamford. Irene graduated from the Holy Name Parochial School, the Sacred Heart Academy, the Merrill Business School, and was employed for a time as a secretary to a local law firm. It was while studying at the Merrill Business School that she met Joseph. They married and from that point on they were partners in love and best friends throughout the rest of her life. Irene was a gentle and graceful woman with a warm sense of humanity and a caring soul. She was active in community causes, most notably in collecting resources for the American Cancer Society and by donating blood regularly to the American Red Cross. Irene’s loving spirit stretched out like a warm blanket to cover her entire family and friends. She was athletically active and loved the outdoors. She spent time on the beach at the water’s edge and enjoyed swimming, dancing, ice skating, traveling, and roller skating as well. She is survived by her husband Joseph Sebastian Interlandi, her sons and daughters, Joseph Interlandi Jr of Hollywood, FL, Carol Ann Interlandi of Norwalk, Donna Marie Manges of Alexandria, VA, Michael Interlandi and his wife Jill of Ridgefield, and Paul Interlandi and his wife Emily of Stamford. She is also survived by eight grandchildren and by four great grandchildren. Her grandchildren are Shannon Manges of Allentown, PA, Emily Shea Kowalski and her husband Matthew of Ellicott City, MD, Laura Anne Interlandi of Baltimore, MD, Nicole Lee Interlandi of New York City, Lisa Anne Caldari and her husband Nicolae of Ridgefield, Jacklyn Marie Interlandi of Darien, Paul Joseph Interlandi of Stamford, and Michael Peter Interlandi of Stamford. Her great grandchildren are Lukas James Kowalski of Ellicott City, MD, Lottie Lydia Caldari of Ridgefield, Oliver Thomas Caldari of Ridgefield, and Jackson Carter Kowalski of Ellicott City, MD. Irene will be missed by her many friends as well. Particularly her long-time caregiver, and friend, Christina. Irene was predeceased by her parents William and Alexandra Zurkowski. By her siblings Edward Zurkowski, Henry Zurkowski, Thaddeus Zurkowski, Regina Lewicki, and by Genevieve Maloney, all who resided in Stamford, by Hedwieg Biessman of Aurora, CO, and Joseph Zurkowski of Fairfield, CT. Family will receive relatives and friends at the Bosak Funeral Home, 453 Shippan Avenue, in Stamford,on Thursday morning, January 30th from 9 am to 10:30 am with a Mass of Christian burial to be celebrated at 11 am at St Leo Parish, 24 Roxbury Road in Stamford. She will be laid to rest at Queen of Peace Cemetery, Rock Rimmon Rd in Stamford after her funeral mass. In lieu of flowers the family requests that a donation be made to the: Alzheimer’s Foundation of America ( https://alzfdn.org/ ) or to your favorite charity. The family has entrusted the funeral arrangements to Bosak Funeral Home, 453 Shippan Avenue, in Stamford, CT. If you would like to leave a condolence message for the family you may visit the guestbook on bosakfuneralhome.com or on Facebook at facebook.com/bosakfuneralhome.

Irene Francis Interlandi died peacefully on Friday, January 24, 2020. She was surrounded by her loving husband Joseph, her beloved family, and her friend and caregiver when she left us. She will be deeply missed by family and friends. Irene... View Obituary & Service Information

The family of Irene F. Interlandi created this Life Tributes page to make it easy to share your memories.