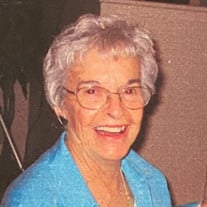 Jane Buckley Jackson originally of Stamford, and currently of Hamden, passed away on June 6, 2020 while at Northbridge Health Care Center at the age of 97. Jane was born in Brooklyn, NY on September 16, 1923. She was the daughter of the late Jane Varian and Daniel Buckley and the step-daughter of the late Joseph Varian. Jane was predeceased by her husband, Lewis F. Jackson (1923 – 2018) and her daughter-in-law, Christina F. Jackson. Jane graduated from Stamford High School in 1941. She joined the WAVES shortly after the United States entered WWII and was assigned to the Naval Communications outfit in Washington DC where she served until 1945. During this time, Jane, a cryptographer, was assigned to a team working as an integral part in breaking the Japanese code and was subsequently awarded a Ribbon Bar from the United States Communications Intelligence Organization. After the war, Jane returned to Stamford and was employed at the Fidelity Bank. Later, Jane served as a professional fund raiser for The United Way of Stamford. In 1949, she married her high school classmate, Lewis Jackson, whom she cherished for nearly 69 years raising five children. Jane was a longtime volunteer for the Easter Seal Rehabilitation Center, Girls Club of Stamford, Catholic Charities, as well as several other non-profit organizations. She was a Member of the Ancient Order of the Hibernians and along with her husband, Lew, was the grand marshal in the 11th Stamford St Patrick’s Day Parade. Jane, together with Lew, who was an Army Air Force veteran of WWII, volunteered at several high schools’ Veterans Day assemblies where they both shared stories of their wartime experiences with today’s students. Jane is survived by her beloved five children: Scott of Newtown; Garry and partner Nancy Armstrong of Waitsfield VT; Lee of Stamford; Robert of Chicago and Susan and Richard Naramore of Cheshire. Jane’s grandchildren include: Timothy and Kerri Jackson of Newtown and Jeremy and Sara Jackson of New York City together with Katherine and Ryan Gorman, Cully, and Jackson Naramore in addition to four great grandchildren: Emily, Paige, Reece and Cora Jackson. The family would like to thank the entire staff at Meadow Mills Assisted Living and Memory Care in Hamden for the care and concern for Jane during her residence. To ALC, past and present, thanks for the memories. A funeral service will be held at Our Lady Star of The Sea on Shippan Ave in Stamford at a date to be determined.

Jane Buckley Jackson originally of Stamford, and currently of Hamden, passed away on June 6, 2020 while at Northbridge Health Care Center at the age of 97. Jane was born in Brooklyn, NY on September 16, 1923. She was the daughter of the late... View Obituary & Service Information

The family of Jane Jackson created this Life Tributes page to make it easy to share your memories.

Jane Buckley Jackson originally of Stamford, and currently of...