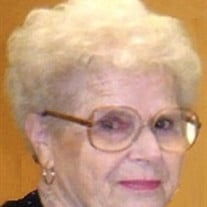 Joan Barbara Coughlin Dean, passed away on the morning of Thursday, October 5, 2017 at Connecticut Hospice in Branford. Joan was born on an elevator at the old Stamford Hospital in Stamford, CT on October 4, 1930 to the late Henry Howard Coughlin of Prince Edward Island, Canada and Anna Pestick Turpin Coughlin of Auburn, NY. Joan was 87 years old at the time of her passing. A life-long resident of Stamford, CT, Joan attended Rogers School from kindergarten to the 9th grade, and graduated from Stamford High School with the class of 1948. She went on to attend Albertus Magnus College in New Haven, CT where she earned a degree in Gregorian chant. On June 24, 1950 Joan married her beloved husband of 65 years, James H. Dean, and in 1958, they purchased the home in Stamford where they raised their two sons, James Jr. and Stephen. Joan loved her music, and she put her passion to work by working as an organist and soloist over a 52 year span, playing and singing at churches throughout the Stamford area. She played at St. Benedict, St. John the Evangelist, St. Cecilia, St. Clement of Rome and Our Lady Star of the Sea churches, as well as for other non-Roman Catholic churches. She was a proud, 50+ year member of the American Guild of Organists and she sang with the Troupers Light Opera Company for over 20 years. Joan also enjoyed spending time quilting and crocheting. Over the years she took classes with Meg Moor at Stamford High School, Katherine Malloch of Stamford, the Nimble Thimble in Port Chester, NY and at Quilt Essentials in Norwalk, CT. Her first handstitched quilt took 9 months to finish but over time Joan became a master quilter and crocheter. She was a quilter at the Belltown Fire House and a member of the Northern Star Quilters of New York, Common Threads of Greenwich and Goodwives Quilters in Rowayton, CT. Throughout her time knitting and crocheting Joan made hundreds of hats, scarves and blankets for the homeless in the community and many lap quilts and regular quilts. Her many talents will be sorely missed by many. Joan was a widow to James H. ("Jimmy") Dean who passed away on October 21, 2015. She is survived by her son, James, Jr., of San Diego, CA; and a sister-in-law, Sister Anne Pearl Dean of The Sisters of St. Joseph of West Hartford, CT. In addition to her husband, Joan was preceded in death by her son, Stephen.A Mass of Christian Burial will be celebrated at 10 am on Thursday morning, October 19th at St. John R.C. Church, 1986 Post Road, in Darien, CT. The interment will be private. The Dean family has entrusted the funeral arrangements to the Bosak Funeral Home. If you care to leave an online expression of condolence you may sign the guestbook at www.bosakfuneralhome.com or on Facebook at www.facebook.com/bosakfuneralhome.

Joan Barbara Coughlin Dean, passed away on the morning of Thursday, October 5, 2017 at Connecticut Hospice in Branford. Joan was born on an elevator at the old Stamford Hospital in Stamford, CT on October 4, 1930 to the late Henry Howard Coughlin... View Obituary & Service Information

The family of Joan Barbara Dean created this Life Tributes page to make it easy to share your memories.

Joan Barbara Coughlin Dean, passed away on the morning of Thursday,...