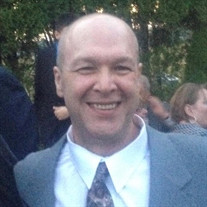 John Russell Bateman III, better known as Russell, passed on Saturday, October 3, 2020 after a valiant battle with a sudden critical illness. I never thought I would be writing my husband&#8217;s obituary, yet here I am overwhelmed at the task... View Obituary & Service Information

The family of John Russell Bateman III created this Life Tributes page to make it easy to share your memories.