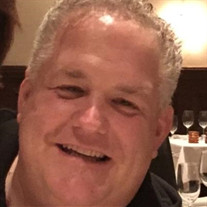 John A. Calicchio passed away peacefully at Stamford Hospital surrounded by his loving family on Tuesday, April 10, 2018 after a courageous battle with cancer. John was a lifelong resident of Stamford. He was born on July 1, 1967 in Stamford CT to Mary “Deluca” Calicchio and the late John O. Calicchio. He is survived by his loving wife Angela and his beloved daughter Samantha, who is a student at University of Alabama. Also surviving are his in-laws, aunts, uncles, nieces, nephews, cousins and special friends; and by a brother in law and business partner, Michael and sister in law, Lucy Tsiahouridis. He was predeceased by his father and by grandparents, John “Poppi” and Catherine “Nonni” Deluca. John was a graduate of Stamford Catholic High School and attended Southern Connecticut State University before starting his business with the help of his Grandfather “Poppi”. John was in the construction industry for over 30 years, building homes, commercial buildings and various construction projects. And, in the last several years, he was co-owner of the Tomāto Tomäto restaurant in Shippan. John was an outstanding athlete and loved the New York Yankees. He also truly loved coaching his girls’ softball team “The Warriors”. John knew the secret to raising a softball players’ game. He constantly complimented the girls, kept them smiling, taught competitiveness and celebrated the wins. He reinforced the priorities of playing and the girls understood them: “Do your best, have fun doing it and play to win!” He approached life in the same way. John coached Sam for a number of years. It wasn’t easy … for Sam. As with all pitchers, there were wins and losses. But no matter how the game ended, John was so proud of her. He loved to see her on the mound. Watching Sam pitch was the best part of his week. Watching Sam grow was the best part of the game. John had a love for old cars, car racing and playing cards. He enjoyed entertaining his family and friends, meeting people and made great friends. He will be greatly missed by all who have known him throughout the years. A mass will be celebrated in his memory on Saturday, April 14th at 11am at St. Mary’s Church 566 Elm Street in Stamford, CT. His burial will be held private. If you would like to leave a condolence message online please visit the family guestbook at www.bosakfuneralhome.com or at www.facebook.com/bosakfuneralhome to share memories with his family.

John A. Calicchio passed away peacefully at Stamford Hospital surrounded by his loving family on Tuesday, April 10, 2018 after a courageous battle with cancer. John was a lifelong resident of Stamford. He was born on July 1, 1967 in Stamford... View Obituary & Service Information

The family of John A Calicchio created this Life Tributes page to make it easy to share your memories.

John A. Calicchio passed away peacefully at Stamford Hospital...