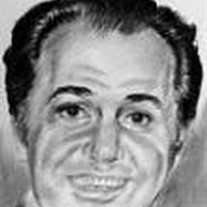 John A. DePoli, 91, of Riverside, CT and former resident of Stamford, CT, passed away on Tuesday, October 28, 2014 at Nathaniel Witherell Rehabilitation Center and Nursing Center with his loving family by his side.  John, who was also affectionately known as “Stoogie”, was born January 12, 1923 in Stamford to the late Maria (Giordano) and Abramo DePoli. As many other members of The Greatest Generation, John went directly from school into military service.  He joined the U.S. Army with the 82nd Airborne as a paratrooper. John took part in many missions throughout the European theater during World War II and jumped into combat in St. Mére Église, France on D-Day, Sicily and Salerno, Italy, Nijmegen, Netherlands and the Battle of The Bulge.  Upon returning to civilian life after WWII, he worked for Schick, Inc. in Stamford, where he was an active part of their bowling league. Shortly after Schick moved to Milford, John opened his first of several successful restaurants in Port Chester, NY called Stardust.  His last and longest venture into the restaurant and catering business was with The Regency on Shippan Avenue in Stamford. As a lifelong resident of the area, John was very active in the community.  As an entrepreneur he hosted numerous golf tournaments and fundraisers for various charitable organizations.  He was the Founder and Chairman Emeritus of The Umbrella Club.  John is survived by his beloved wife of 65 years, Margaret (Faugno) DePoli, his two loving daughters; Gayle DePoli and Maryann Coppola and husband Eliseo (Lee), his precious grandsons; John Coppola and his wife Christa, and Jason Coppola and his fiancé, Christie Roche, three great grandchildren; Tula, Maverick and Piper Coppola, and his nephew, Ralph Ieva and his wife Arlene. In addition to his parents, John was preceded in death by his sisters Angie and Betty. The DePoli family will receive the condolences of friends and family on Friday, October 31st from 11:30a.m. to 12:30p.m. at Bosak Funeral Home, 453 Shippan Avenue in Stamford. Following visitation, a procession will leave the funeral home for a 1p.m. memorial service at Sacred Heart Church, 37 Schuyler Avenue in Stamford. At the request of the family the entombment will be private. Donations in John’s memory are encouraged, and can be made to The Umbrella Club of Fairfield County, Inc., P.O. Box 112238, Stamford, CT 06911-2238 or online at www.umbrellaclub.org/donate. The family has entrusted the funeral arrangements to Bosak Funeral Home, 453 Shippan Avenue, in Stamford.  If you care to leave a condolence message online please visit the family guestbook on www.bosakfuneralhome.com or on the funeral home Facebook page at www.facebook.com/bosakfuneralhome.

John A. DePoli, 91, of Riverside, CT and former resident of Stamford, CT, passed away on Tuesday, October 28, 2014 at Nathaniel Witherell Rehabilitation Center and Nursing Center with his loving family by his side.  John, who was also affectionately... View Obituary & Service Information

The family of John A DePoli created this Life Tributes page to make it easy to share your memories.

John A. DePoli, 91, of Riverside, CT and former resident of Stamford,...