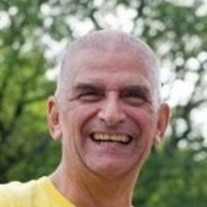 Life Legacy John Francis Iscaro passed away October 20, 2017, at the Stamford Hospital surrounded by his loving family after fighting a courageous battle with pancreatic cancer. John was born on October 5, 1948, in the Bronx, NY, to Peter and Edith Iscaro.After high school, he attended the Fashion Institute of Technology. John joined the US Navy in 1968 and was a plank owner on the USS John F. Kennedy, representing his country for four years in the Mediterranean as a machinist mate, where he acquired his air conditioning and refrigeration skills. This led to his career as a facilities manager at IBM Corporation's Real Estate & Construction Division, Westchester Country Club, and Greenwich Country Club before retiring.John leaves behind his beloved wife and soul mate, Audrey (Lisella); his best friends and sons, Peter of West Virginia, and Paul, his wife, Melissa, and granddaughter, Aviana, of Somers, NY, as well as his brother and life-time friend, James and his wife, Lucille, of White Plains, NY. He is also survived by his 17 sisters- and brothers-in-law, and many nieces, nephews, great-nieces and nephews and cousins. He was predeceased by his parents.At the time of his passing, John served as the Commodore of the Halloween Yacht Club in Stamford. Second to his wife and family, John's love was sailing, and he spent as much time as possible on the Long Island Sound aboard Phunsuch. He was also an avid gardener, skilled woodworker, and Mr. Fix It Extraordinaire. John also served as a volunteer at St. Clement's Church.When in the Navy, John was described as competent, conscientious, open-minded, and just, allowing him to lead successfully and gain respect of others; mild-mannered and well-groomed; a true gentleman and devoted individual. These characteristics held true throughout his life. He will be sorely missed by his family and friends.The family will be receiving friends and family on Wednesday, October 25th, from 4pm to 8pm at the Bosak Funeral Home, 453 Shippan Avenue, Stamford, CT (www.bosakfuneralhome.com). A Mass of the Christian burial will take place at 11am on Thursday, October 26th at St. Clement of Rome Church, 535 Fairfield Avenue, Stamford, CT.In lieu of flowers, donations in memory of John Iscaro may be made to St. Clement's of Rome Church, 535 Fairfield Avenue, Stamford, CT 06902; or Stamford Hospital Foundation – Hope in Motion, 1351 Washington Blvd, Stamford, CT 06902, Suite 202 (stamfordhospitalfoundation.org).The family has entrusted the funeral arrangements to the Bosak Funeral Home. If you care to leave an online expression of condolence you may sign the guestbook at www.bosakfuneralhome.com or on Facebook at www.facebook.com/bosakfuneralhome.

Life Legacy John Francis Iscaro passed away October 20, 2017, at the Stamford Hospital surrounded by his loving family after fighting a courageous battle with pancreatic cancer. John was born on October 5, 1948, in the Bronx, NY, to Peter and... View Obituary & Service Information

The family of John Francis Iscaro created this Life Tributes page to make it easy to share your memories.