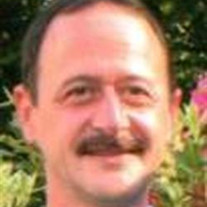 John M. O’Connor, age 53, was born June 10, 1961 to Peter and Mary O’Connor in Stamford, CT. He passed away on August 7, 2014 after brief battle with cancer, with his loving family by his side. He attended Stamford Catholic High School and graduated in 1979 at which time he entered the air force. He coached Stamford Youth Hockey and taught religious education at St. Gabriel’s Parish. He was employed with RFR Realty as a senior engineer for the Stamford Plaza Portfolio from 1999 through 2014. Prior to that, he was employed with Pitney Bowes. He was an active member of the Stamford Elks Lodge 899 and Fourth degree member of the Knights of Columbus Council 41 and Lafayette assembly 109. He was a devoted and loving father to Johnny and Peter and a devoted husband of 25 years to Linda. He also leaves behind brothers, Jim O’Connor and Robert O’Connor; sisters, Cathy Shaw (Richard), and Patricia Zaccagnini (George); a brother-in-law, Frank Megale (Cindy); sister-in-laws, Grace Kydes, Fran Zeiss, and Cathy Nikolopoulos (Steve); and by many nieces and nephews. He was predeceased by his parents Peter and Mary O’Connor. Family will receive relatives and friends on Tuesday, August 12th from 4pm to 8pm at the Bosak Funeral Home, 453 Shippan Avenue, in Stamford, CT. A Mass of Christian Burial will be held on Wednesday, August 13th at 11am at Our Lady Star of the Sea Church, 1200 Shippan Avenue, in Stamford, CT. Interment will follow to St. John Roman Catholic Cemetery, in Darien, CT. In lieu of flowers, memorial donations can be made to the family at www.youcaring.com/johnoconnor The O’Connor family has entrusted the funeral arrangements to Bosak Funeral Home, 453 Shippan Avenue, Stamford, CT. If you would like to leave an expression of sympathy for the family online, you may sign the guestbook at www.bosakfuneralhome.com or visit the funeral home Facebook page at www.facebook.com/bosakfuneralhome to share memories of John with his family.

The family of John M O'Connor created this Life Tributes page to make it easy to share your memories.