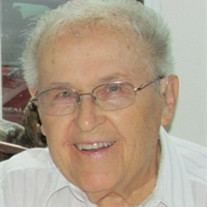 John Andrew Shawluk, resident of Stamford, CT, passed away at his home on the morning of Tuesday, February 21, 2017 with his loving family at his side. He was 93 years old. John was born in Bridgeport, CT, on December 1, 1923 to the late Andrew P. Shawluk and Katarzyna “Mihna” Shawluk.John graduated from Stamford High School with the class of 1941. He enlisted in the United States Navy and served from 1943-1945. He was proud to march along side his fellow veterans in the Veteran’s Day Parades in Stamford. John worked for Pitney Bowes as a group leader and retired in 1985 after 40 years. He was a member of Holy Name of Jesus Parish.John enjoyed spending time working on his many Volkswagons and different machinery. There was nothing he couldn’t fix. He helped his family with many projects always being the first to arrive and last to leave. He was always willing to help anyone with anything they needed but never expected anything in return.John was a true gentleman with a very kind and generous heart. He was quick witted and a great conversationalist. He will be sadly missed by his family and all that knew him.John is survived by his loving and devoted wife of 70 years, Frances Shawluk (Zivko), his daughters; Brenda Morris (Rex) and their children; Roberta Morris (Tim Hines), Mary Deriggi (Anthony), Rex Morris Jr. (Maggie) and Dawn Dellorusso. Karen McCaffrey (Terry) and their children; Terri Fiedler (Justin), Kelly McCaffrey, Bill McCaffrey (Jill), Megan McCaffrey and John McCaffrey. Gale Capomolla (Fortunato) and their children; Fortunato Capomolla Jr., Marianna DeLamar (Anthony), Francesca Sikorski, (David), Rachel Gross (Richard). and 25 great grandchildren. In addition to his parents, John was preceded in death by his sister Mary K. Bawleck.John’s family will be receiving the sympathy and condolences of friends and family on Thursday, February 23, 2017 from 4pm to 8pm at Bosak Funeral Home, 453 Shippan Ave., Stamford, CT 06902. A mass of Christian burial will take place on Friday, February 24, 2017 at 10:00am at Holy Name of Jesus R.C. Church, 325 Washington Blvd., Stamford, CT 06902. The interment will immediately follow mass at Fairfield Memorial Park, 230 Oaklawn Avenue, Stamford, CT 06905.In lieu of flowers, please consider donating in John’s name to the American Cancer Society, P.O. Box 22478, Oklahoma City, OK 73123 or online at www.cancer.org/donate.The family has entrusted the arrangements to Bosak Funeral Home, 453 Shippan Avenue, in Stamford. If you care to leave an online condolence message you may visit the family guestbook on Facebook at www.facebook.com/bosakfuneralhome.

John Andrew Shawluk, resident of Stamford, CT, passed away at his home on the morning of Tuesday, February 21, 2017 with his loving family at his side. He was 93 years old. John was born in Bridgeport, CT, on December 1, 1923 to the late Andrew... View Obituary & Service Information

The family of John Andrew Shawluk created this Life Tributes page to make it easy to share your memories.

John Andrew Shawluk, resident of Stamford, CT, passed away at...