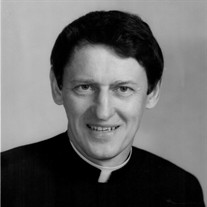 On Friday, May 1, in his ninety-first year of life and sixty-fifth year of priestly ministry, Monsignor John Squiller of Stamford passed into the arms of the Lord he served so faithfully. He was born on January 28, 1930 in Bairdford, PA, the son of John and Stella Squiller. He attended West Deer Twp. High School where he played varsity football. He later attended Notre Dame University, graduating in 1952 with a BA degree in Classics and Philosophy. Answering the call of the Lord to priestly service, he enrolled in St. Josaphat Seminary and the Catholic University of America in Washington, DC, graduating with a Licentiate in Sacred Theology in 1956. On June 14, 1956 he was ordained to the holy priesthood by Bishop Ambrose Senyshyn OSBM, at the Ukrainian Catholic Cathedral of the Immaculate Conception in Philadelphia. From that day until his last he devoted his life to the service of God’s people in the Ukrainian Catholic Eparchy of Stamford serving parishes in Ansonia CT, Brooklyn NY, Auburn NY, Spring Valley NY, Rochester NY, Yonkers NY, Stamford CT, Woonsocket RI and Fall River RI. For five years he was the director of Holy Spirit Epar-chial Cemetery in Hamptonburg NY. Msgr. John was a born teacher. He liked nothing better than teaching others about the love that God has for them. At four different times totaling twenty years he was on the staff of St. Basil Prep School in Stamford serving as religion instructor and track & field coach. He also served as rector of St. Basil College Seminary on two occasions for a total of eight years. For six years he was a religion instructor at the Mother of God Academy in Stamford. Msgr. John was the recipient of two Papal honors during his long life of priestly service: Chaplain of His Holiness conferred by Pope Paul VI in 1978 and Prelate of Honor of His Holiness conferred by Pope Saint John Paul II in 1993. In his final years Msgr. John resided at St. Basil Seminary in Stamford, where he devoted his days to prayer and teaching. He could be found every afternoon in the seminary chapel faithfully making a Ho-ly Hour, a life-long devotion of his. He is survived by two sisters, Delores (Kapustik) and Johanna, brother-in-law John Grottenthaler, sister-in-law Jean and numerous loving nieces and nephews. He was predeceased by two brothers, Milton and Thomas and brother-in-law Steven Kapustik. At the end of a life of dedication to God and service to His people, the words of Jesus can truly be ad-dressed today to Msgr. John: “Well done, my good and faithful servant. Come, share in your master’s joy.” Mt. 25:23 Due to current CDC Federal guidelines in keeping with public safety standards, there will be no visitation at the funeral home. A Funeral Divine Liturgy will be held on Thursday, May 7 at 10:00 am at Holy Spirit Ukrainian Catholic Cemetery, 141 Sarah Wells Trail, in Campbell Hall NY 10916. In memory of Msgr. John, donations can be made to: St. Basil Seminary, 195 Glenbrook Road in Stamford, CT 06902 or offerings for Divine Liturgies for the repose of his soul. The family has entrusted the funeral arrangements to Bosak Funeral Home, 453 Shippan Avenue, in Stamford, CT. To leave a condolence message for the family you may visit the guestbook at www.bosakfuneralhome.com or on Facebook.com/bosakfuneralhome.

On Friday, May 1, in his ninety-first year of life and sixty-fifth year of priestly ministry, Monsignor John Squiller of Stamford passed into the arms of the Lord he served so faithfully. He was born on January 28, 1930 in Bairdford, PA, the... View Obituary & Service Information

The family of Msgr. John Squiller created this Life Tributes page to make it easy to share your memories.

On Friday, May 1, in his ninety-first year of life and sixty-fifth...