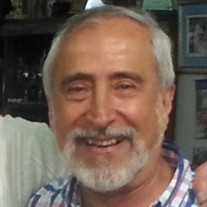 José Felipe Abarca, 73, passed away on October 4, 2021 at the Almenara hospital in the city of Lima, Peru, after suffering from an illness. Affectionately called “Pepe”, he was born in Lima, Peru on April 14, 1948 to the late José Felipe Giraldo Navas and Haydee Marie Abarca Valdivia. He was also married to Silvia Llanos, mother of his three children. After her passing at the early age of 36, José Felipe never remarried and dedicated himself to raising his children. José Felipe is survived by his children Giselle, Johanna and Felipe Giraldo Llanos and his grandchildren Alejandro, Renato, Nicolás, Mafen and Jaime. He is also survived by his siblings Willy Giraldo Abarca, Luis Montesinos Abarca, Daniel Montesinos Abarca and Madeleine Montesinos Abarca along with many nieces and nephews. José Felipe had been an exemplary father, husband, grandfather, as well as a great brother and a prodigious son who obtained a law degree with a diploma in commercial law at the San Martin de Porres University in Lima in 1968. He worked in banking for many years and practiced law in his native Peru until deciding to make the move to the United States to pursue a more active role in his brother’s organization. In 2002, he moved to the United States to participate in the Peruvian-American Community Center of Connecticut (PACC), and at that same time dedicated his time to support the political campaign of his brother Willy Giraldo Abarca to become a City Council Member in Stamford. With his brother’s support Willy Giraldo eventually emerged triumphant as the first Peruvian to be elected Councilman of Stamford. In 2006, José Felipe, seeked out the opportunity to be President of the Consejo de Consulta at the Peruvian Consulate which allowed him to create along with his brother Willy, Wicko Enterprises Co., the first traveling consulate in Stamford. In the following years, he actively participated in the Peruvian American National Roundtable (PANR), in the United States, founded by the Peruvian leader and economist Daniel Jara. In 2010, José Felipe, ventured into virtual journalism by creating his popular blog: "Girando sobre la Brújula" that focused on economic issues and international news. Prior to that he had written several articles on economics, politics and migration in other newspapers. In 2011, José Felipe, while at PACC, was appointed International Affairs & Press Director, and together with council member Willy Giraldo and other members of the Board of Directors, they worked to promote the signing of the Sister Cities Agreement between the cities of Stamford, CT and Lima, Peru. Mayor of Stamford Michael A. Pavia and the Mayor of Lima, Susana Villarán de la Puente, reaffirmed the Sister Cities Agreement, on November 18, 2011, placing their signatures and their commitment to work together to promote mutual cooperation, trade, tourism and industry between both cities. José Felipe, was also a survivor of prostate cancer and for this reason he continuously supported the NGO Esperantra, an organization in Peru that focuses on helping low-income families battling illnesses. On Saturday, November 27, 2021, at 10:00 AM, a mass will be celebrated in his honor at Saint Benedict Church, 1 St Benedict Cir, Stamford, CT 06902. The ceremony will be held in person and virtual.

The family of Jose Felipe Giraldo Abarca created this Life Tributes page to make it easy to share your memories.