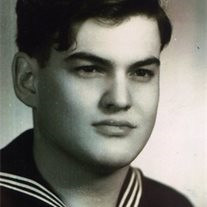 Joseph Fabian Boucher, a longtime Stamford resident passed peacefully at home surrounded by his loving family on February 25, 2017, at the age of 88 years old. He was born on March 31, 1928 to Leon and Leda Boucher, and raised in Grand Falls, New Brunswick, Canada. Joseph was predeceased by his wife Rosemarie Sheridan Boucher of 60 years. He is survived by his children: Leda Amanatidis and her husband Kostantinos of Fairlee, VT, Robert Boucher, Sr. and his wife Denise of Stamford and Jacqueline Boucher of Alexandria, VA. He is also survived by his beloved grandchildren: Robert Joseph, Jr. and his wife Lauren Danielle, Katherine Rose, Margaret Elizabeth and James Robert Boucher of Stamford; John Joseph, David Konstantinos, Joseph Xenos and Hope Christina Amanatidis of Fairlee, VT; his sisters Osanne Carroll and Rosita Ouellet of Canada; and by numerous nieces and nephews. Joe arrived in Stamford in 1953 after serving 8 proud years in the U.S. Navy on the USS Laws. Joe rented a room from Grandma Sheridan on Washington Avenue, where he met and married his wife Rosemarie. He was a devoted husband and father. In 1958, Joe joined Local 311 Plumber and Pipefitters Union until his full retirement. He was known as Joe, Dad, Pa Pere, Pop and Fabian. Joe was the epitome of strength, love and humor but also a man of his word and integrity. He was a longtime parishioner of St. Cecilia's Catholic Church, a member of the Knights of Columbus, a 4th Degree Knight, Veteran's of Foreign War, and an exemplary Red Cross blood donor of 13 gallons. He was loved by so many and will be truly missed. In lieu of flowers, please consider making a donation in his memory to: Veterans of Foreign War, Springdale Post 9617, PO Box 4712, Stamford, CT 06907. A special thanks to all of the in-home nursing care Joe received. To honor Joe's life, family and friends will gather TONIGHT, Monday, February 27th from 4pm-8pm at Bosak Funeral Home, 453 Shippan Avenue, Stamford, CT. A Mass of Christian Burial will be celebrated Tuesday, February 28th at 11am at St. Cecilia's Church, 1186 Newfield Avenue, Stamford, CT. Burial will be held private. If you would like to leave an expression of sympathy for the family online, please sign the guestbook at www.bosakfuneralhome.com or visit the funeral home Facebook page at www.facebook.com/bosakfuneralhome to share memories with her family.

Joseph Fabian Boucher, a longtime Stamford resident passed peacefully at home surrounded by his loving family on February 25, 2017, at the age of 88 years old. He was born on March 31, 1928 to Leon and Leda Boucher, and raised in Grand Falls,... View Obituary & Service Information

The family of Joseph Boucher created this Life Tributes page to make it easy to share your memories.