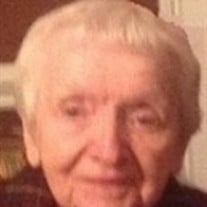 Life Legacy March 2, 2016, Katherine Mildred Zvonkovic Slavinsky, a resident of Stamford for more than 100 years, died Tuesday, March 2, in the comfort of her home. She was 105 years old and believed to be the oldest registered voter in the City of Stamford. She died of natural causes, according to her family. Born July 28, 1910, in Branford, CT, she was a daughter of the late Michael and Anna Resjan Zvonkovic.Katherine was a member of St. Maurice Church in Stamford and the Croatian Fraternal Union. Katherine grew up in the South End of Stamford in the days of gaslights and horse drawn wagons. She had a special fondness for her family and lifelong friends that she made over the years. Katherine loved to bake, and her home was always filled with the aroma of baking bread and special Croatian treats that she prepared for all the holidays. The warmth found in her kitchen was equaled by the warmth found in her heart. Everyone was always welcome in the home that she made with her husband, John, her mate and friend with whom she was married for 45 years. Katherine worked for Shick and Norma-Hoffman in Stamford and later for Bozak Speakers in Norwalk. Following her retirement, she found her favorite job assisting her dear friend, Cathy Pike and her husband Bill, with their beloved children, Lisa, Daniel, and Bob. Katherine took great pleasure in telling stories of her youth to her grandchildren – Ava, John, and Katherine - whom she treasured and who in turn adored her. She was devout in her religion, a woman who said her prayers daily and practiced the virtues of forgiveness and compassion in all that she did. Even in her final days, Katherine provided joy, guidance, laughter, and love to her family and friends who will carry her in their hearts forever.Katherine is survived by her sons, John and his wife, Ellen; and Robert, and his wife Jennifer, all of Redding. She is also survived by her grandchildren, Ava Marie, Katherine Grace, and John Bernard Slavinsky, all of Redding. Katherine is also survived by her beloved nieces, Kristen Zaumseil of Norwalk, Jeanne Anderson (Gary) of Danbury, Donna Miller (Jeffrey) of Woodbury, Tanya Slavinsky of Stamford, and Anna Klumac of New Canaan; her nephews, David Zaumseil of Telluride, CO; and Joseph Rudis (Irene) of Brooklyn, NY and her valued friend, Paul Plepis. Katherine was predeceased by her husband, John; sisters, Mary Muskovitz and Anne Mravunac; her niece, Dorothy Zaumseil and nephews, Joseph Muskovitz, Joseph Stetz, and Joseph Slavinsky.The Slavinsky family will receive the sympathy and condolences of friends and family on Tuesday, March 8th from 9am to 10:30am at Bosak Funeral Home, 453 Shippan Avenue, Stamford, CT 06902. A mass of Christian burial will immediately follow at 11am at St. Maurice R.C. Church, 358 Glenbrook Road, Stamford, CT 06906. The interment will follow mass at St. John Cemetery in Darien.The family has entrusted the funeral arrangements to Bosak Funeral Home, 453 Shippan Avenue, in Stamford. If you care to leave an online condolence message you may visit the family guestbook at www.bosakfuneralhome.com or on facebook at www.facebook.com/bosakfuneralhome.

Life Legacy March 2, 2016, Katherine Mildred Zvonkovic Slavinsky, a resident of Stamford for more than 100 years, died Tuesday, March 2, in the comfort of her home. She was 105 years old and believed to be the oldest registered voter in the... View Obituary & Service Information

The family of Katherine M. Slavinsky created this Life Tributes page to make it easy to share your memories.