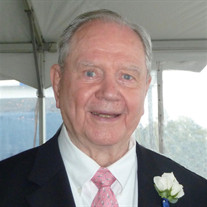 Lawrence “Larry” A. Schmidt, 95, of Stamford, CT passed away peacefully in his home on Thursday November 14, 2019 surrounded by his wife, Ruth, and his 6 surviving children: Karen (Don Lamontagne), Gerrie Lambo, Kenny Schmidt (Jason Miller), Mary (Kevin Gibson), Ellen (Charlie Lang) and Barbara (Mike Ryan) as well as his daughter-in-law Debbie Schmidt. He was predeceased by both of his parents, his sister, Geraldine, his three brothers, Raymond, Robert, Arthur, his daughter, Kathie Ruszkowski, his son, Larry Jr., his son-in-law Peter Lambo, and his great grandson, Aiden Lambo. Lawrence was born September 3, 1924 in New York City, NY to Julius and Gertrude Collison Schmidt. As a runner at Bishop Loughlin Memorial High School, he was the national champion miler in the country in 1942 with a time of 4:27.8. After one year at Manhattan College and one year at Columbia University, he volunteered to join the US Navy. During WWII, he worked in the Pacific on a minesweeper. He valiantly volunteered to disarm a mine attached to the ship by hand, receiving an award for his bravery. He went on to make a career as a civil engineer and later worked for his late son’s pool company, Greenwich Pool Service, until he was 85 years old. Above all, Larry was a devoted husband to his first and only love, Ruth, with whom he shared seventy three beautiful years of marriage, a father of eight, a grandfather of thirty two, and a great grandfather of forty. He is most remembered for being the loudest and proudest fan at the events of each of his children, grandchildren, and great grandchildren, for having tears of happiness in his eyes, and for being an avid bridge player with Ruth. He was a lifelong, dedicated Yankee’s and UConn women’s basketball fan. As a Eucharistic Minister at St. Cecilia’s Church in Stamford, CT, Larry was an unwavering and devout member of the Catholic Church. He exemplified the teachings of his faith in his daily life. Although he travelled the world during the war and later in life with his wife, he was happiest while with his family. He never missed a family event, big or small, regardless of the distance. Even with such a large family, he always managed to make those around him feel loved and special. As the patriarch of his family, he will be missed immeasurably. In lieu of flowers, donations may be made to Visiting Nurse Hospice and Hospice of Fairfield County (care of hospice) 22 Danbury Rd. Wilton, CT 067897 or St. Bridget of Ireland Church, 278 Strawberry Hill Ave., Stamford, CT 06902. Family will receive relatives and friends on Sunday, November 17th from 5pm to 8pm at Bosak Funeral Home on 453 Shippan Ave, in Stamford. A Mass of Christian burial will be held on Monday, November 18th at 11am at St. Bridget of Ireland Church, 278 Strawberry Hill Ave., Stamford, CT 06902. His interment will follow at St. John RC Cemetery 25 Camp Ave, Darien, CT. The family has entrusted the funeral arrangements for Lawrence to Bosak Funeral Home, 453 Shippan Avenue, in Stamford. If you would like to leave an online condolence message for the family visit the family guestbook on bosakfuneralhome.com or on Facebook at facebook.com/bosakfuneralhome.

The family of Lawrence “Larry” A. created this Life Tributes page to make it easy to share your memories.