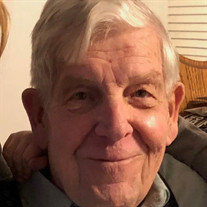 Leonard “Lenny” John Zelinsky, 89, died at his home in Stamford, CT on Friday, March 13, 2020. He was born on June 10, 1930 in New Canaan to the late Anthony and Mary (Visnowsky) Zelinski who emigrated from Lithuania; Leonard was one of nine children. Lenny lived a long life marked by his playful sense of humor and his love for family. He was known equally for his willingness to crack jokes with anyone who crossed his path as he was his artistic endeavors. Lenny spent hours meticulously working on his beloved model airplanes and wooden crafts. While no one was allowed to touch his intricate model airplanes, he took great pleasure in gifting those to who he loved especially nieces, nephews, and neighborhood children with his wooden painted designs of animals. He served during the Korean War and lived all of his adult life in Stamford. Lenny is predeceased by his beloved wife Irene Kapalouski Zelinsky of 55 years, who passed away on March 25, 2010. He is survived by his niece, Karen Zelinsky Cavanaugh and nephew Charles Jeffrey Zelinsky, as well as several nieces, nephews, and cousins who will all miss him dearly. Due to CDC Federal guide lines and in keeping with the public safety standards, the family has requested for a private visitation to be held on Thursday, March 19th and private prayer service on Friday, March 20th, celebrated by Father Hrebenko from the Holy Name of Jesus Church, at the Bosak Funeral Home, 453 Shippan Avenue, in Stamford. The internment will follow immediately after to St John's Cemetery, 25 Camp Avenue, Darien, CT. A Memorial Mass in Leonard’s memory will be celebrated for the public at a later date. The family has entrusted the funeral arrangements to Bosak Funeral Home, 453 Shippan Avenue, in Stamford, CT. If you would like to leave a condolence message for the family you may visit the guestbook on bosakfuneralhome.com or on Facebook at facebook.com/bosakfuneralhome.

The family of Leonard John Zelinsky created this Life Tributes page to make it easy to share your memories.

Leonard “Lenny” John Zelinsky, 89, died at his home in Stamford,...