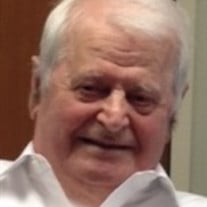 Leonidas (Louie) Zaharis, a longtime resident of Stamford, passed away at St. Camillus Center on Sunday, July 16, 2017. Louie, was born in Agoriani, Sparta, Greece on March 19, 1924, and was one of six children born to the late George and Vasiliki (Papadopoulos) Zaharis. He was 93 years old. Louie emigrated to the US in 1956 from Greece. He owned and operated Zaharis Luncheonette, Chef’s Place with his late brother-in-law Paul Stamatiadis, and Mr. Pickwicks where he enjoyed cooking for and developing friendships with his customers. He had a keen sense of humor, was a real prankster, and always enjoyed a good laugh with friends. Louie will be remembered for his generous nature and his work ethic. Mr. Zaharis is survived by his devoted daughter and son-in-law, Valerie and Periklis Karoubalis, his beloved three grandchildren, Spiro Karoubalis, Patricia Karoubalis and her fiancé Joseph DiPietro, and Louis Zaharis and his wife Shanna, a great grand-daughter, Elliana Zaharis, his devoted sister, Evangelia Stamatiadis, his nieces Helen Stamatiadis and Valerie Stamatiadis Andreoli, as well as many other nieces and nephews whom he loved. In addition to his parents, Louie was preceded in death by his daughter, Frances Zaharis, and siblings, Panagiota (Popi) Karabas, Evdokia Kafentzis, Maria Kyriakoulakou, and Nicholas Zaharis. The family will be receiving the sympathy and condolences from family and friends on the morning of Tuesday, July 25, 2017, from 9am to 10am, at Annunciation Greek Orthodox Church, 1230 Newfield Avenue, Stamford, CT 06905. The funeral service will begin promptly at 10am and will be celebrated by Rev. Father Evan Evangelidis. The interment will immediately follow the service at Woodland Cemetery, 66 Woodland Place, in Stamford. In lieu of flowers, donations can be made to the Annunciation Greek Orthodox Church, 1230 Newfield Ave., Stamford, CT 06905, as well as the Archangels Greek Orthodox Church, 1527 Bedford Street, Stamford, CT 06905.

Leonidas (Louie) Zaharis, a longtime resident of Stamford, passed away at St. Camillus Center on Sunday, July 16, 2017. Louie, was born in Agoriani, Sparta, Greece on March 19, 1924, and was one of six children born to the late George and Vasiliki... View Obituary & Service Information

The family of Leonidas Zaharis created this Life Tributes page to make it easy to share your memories.