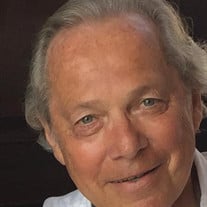 Liege John Kirkland Payne, affectionately known as “Pop Pop”, celebrated seventy-eight years of youth until he passed peacefully on January 27, 2020 at his home with his family by his side. He fought hard for an additional five years to be there for his family after his initial diagnosis of cancer. John was born on December 15, 1941 in Toronto, Canada to the late Lt. Colonel Liege and Evelyn (Mahoney) Payne. John met his wife, Elizabeth “Jane” O’Regan, while working at Greenshields Investment Company in Toronto. They married and soon after moved to New York City to work in the investment business so that he could enjoy American football in time for the Super Bowl. They happily raised their family and their assortment of pets in Greenwich, Connecticut. John dearly loved his family, friends and fellow members of The Great Beaver Society. His passion was golf, his beloved Toronto Maple Leafs and GTO’s. John is survived by his loving wife Jane Payne, his twin daughters: Jillian Payne Gamble and her husband David and Tracy Slayne and her husband Bill; and his son Liege “Lee” Payne Jr. and his wife Sarah. He adored his six beautiful granddaughters, Quinn, Reed, Braden, Dulcey, Regan, and Dylan. Family will receive relatives and friends on Friday, February 7th from 4pm to 8pm at Bosak Funeral Home, 453 Shippan Avenue, Stamford, CT. A Remembrance Service will be held Saturday, February 8th at 11am at The United Church of Rowayton, 210 Rowayton Avenue, Norwalk, CT. The family has entrusted the funeral arrangements to Bosak Funeral Home, 453 Shippan Avenue, in Stamford, CT. If you would like to leave a condolence message for the family you may visit the guestbook on bosakfuneralhome.com or on Facebook at facebook.com/bosakfuneralhome.

Liege John Kirkland Payne, affectionately known as &#8220;Pop Pop&#8221;, celebrated seventy-eight years of youth until he passed peacefully on January 27, 2020 at his home with his family by his side. He fought hard for an additional five years... View Obituary & Service Information

The family of Liege John Kirkland Payne created this Life Tributes page to make it easy to share your memories.