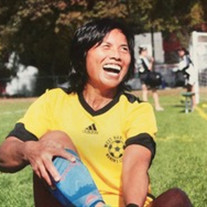 It is with great sadness that the family of Lilia Esther Parkes Laos, announces her passing on Wednesday, March 7, 2018 at her daughter's home in Willimantic, CT after battling lung cancer. Lilia was 58 years young. She was born in Ancash, Peru, and was raised by her mother and father, Maria and Mario Laos in San Jacinto, Peru alongside her seven sisters, Elena, Alicia, Luz, Maria,Teresa, Diana, and Myrna. From a young age she loved being competitive and was a standout force when playing soccer, basketball, and volleyball. She and Alberto Salas gave birth to their child, Lilia Marion Salas, in April of 1986. Four years later, she moved to the United States to build a new life for her and her daughter. Overcoming language barriers and cultural differences, she was quickly successful in creating her own meaningful community of work, family and friends in Stamford, CT. She continued to play sports, garden, and with the help of her sisters, create a fulfilling family dynamic for her daughter. Lilia taught her daughter the value of eating healthy foods and staying active. In 1993, she met, immediately loved, and then married in 1997, Ronald Parkes. They enjoyed family camping trips, raising a daughter, and each other. Lilia was committed to all that she could contribute to, but none more than her family, always taking her role as Tia to all of her “sobrinos” very seriously. When her husband passed away, Lilia was heartbroken, but was always positive about what was and what could be. Traveling was important to Lilia and she explored many parts of the United States, visited her home country many times, including Machu Picchu, and loved getting away from city life for frequent romps in the wilderness. Throughout her life, Lilia was at the core of every team she was ever a part of, and she always brought people together by sharing either her drive to win or her drive to smile. Her passion for soccer led her to the Connecticut Classics where she made friends that were better than goals. In 2013, with the help of a dear friend, she became a United States citizen. Then, in 2016, she achieved the ultimate and became a grandmother to Ronald (Ronnie) Daly. The year and a half that she was able to love and care for him was the realization of her biggest dream and she was the most fun, influential, and loving grandmother you could ever imagine. She is survived by her mother, seven sisters and their children, her beautiful daughter and son-in-law (Stephen Daly), and her grandson. Donations in honor of Lilia Parkes’ legacy can be made to: Smile Train at www.smiletrain.org/ and Kick for a Cause at www.kfac.org. Friends and family may offer their condolences on Sunday, March 11th from 10am – 12:00pm at Bosak Funeral Home, 453 Shippan Ave, Stamford, CT with a memorial service to be celebrated at 12pm. Following the service, her burial will take place at Fairfield Memorial Park Cemetery, 230 Oaklawn Ave, Stamford, CT. If you would like to leave a condolence message online please visit the family guestbook at www.bosakfuneralhome.com or at www.facebook.com/bosakfuneralhome to share memories with her family.

It is with great sadness that the family of Lilia Esther Parkes Laos, announces her passing on Wednesday, March 7, 2018 at her daughter's home in Willimantic, CT after battling lung cancer. Lilia was 58 years young. She was born in Ancash, Peru,... View Obituary & Service Information

The family of Lilia Parkes created this Life Tributes page to make it easy to share your memories.

It is with great sadness that the family of Lilia Esther Parkes...