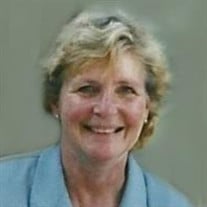 Margaret Lena Costello of Stamford, CT passed away surrounded by her family on the morning of Monday, February 22, 2021 after a short but very difficult battle with cancer. She was 78 years old. Lena was born on May 16, 1942 in Philadelphia, PA to the late Theodore Ellerkamp and Dorothea Gussmann. She attended Little Flower Catholic High School for Girls in Philadelphia and received her nursing certificate from St. Agnes School of Nursing. She then received her B.S. in Nursing from Pennsylvania State University. She was part of the first graduating class of nursing students from Penn State. In 1963, she met her husband, Charles F. Costello, in Philadelphia while he was on leave from the U.S. Navy. They married on June 15, 1968. The couple moved to Boston where she took a job as the Pediatrics instructor at Children’s Hospital Boston. Lena was a devoted mother to her three boys, putting aside a career she loved to raise her sons. Days and nights were spent helping with schoolwork, driving to sporting events, arranging activities, and taking care of the home. Lena would eventually return to nursing, spending over two decades at The Pediatric Center in Stamford. She most enjoyed her experiences and interactions with patients and staff. Her true love was her husband. Married for 52 years, they supported each other, raised a family together, and enjoyed many vacations from the Jersey Shore to Marco Island. Church was a big part of their lives. They attended Mass weekly and lived each day loyal to their family and faith. Lena enjoyed many things, from gardening to yoga to baking, but nothing brought her more joy than the time with her grandchildren who affectionately called her “NaNa.” Lena is survived by her husband, Charles; her three sons: Charles, Thomas, and Matthew (Stephanie); a sister, Trudy Macdonald; two brothers, Theodore and Bernard Ellerkamp; five grandchildren: Emma, Noah, Melody, Brody, and Andy; and by various nephews, nieces, and cousins. She was predeceased by her parents as well as by a brother, Joseph. Family welcomes relatives and friends on Monday, March 1st from 4 pm-8 pm at the Bosak Funeral Home at 453 Shippan Avenue in Stamford. A Mass of Christian Burial will be celebrated on Tuesday, March 2nd at 10:30 am at the Parish of St. Cecilia-St. Gabriel at 1184 Newfield Avenue in Stamford. Her burial will follow at the Queen of Peace Cemetery, Rock Rimmon Road, in Stamford. In compliance with state mandates and the safety of all those attending her funeral services, it is mandatory to wear face coverings and maintain social distancing. If you would like to leave a condolence message online please visit the family guestbook to share memories with her family at www.bosakfuneralhome.com or www.facebook.com/bosakfuneralhome.

Margaret Lena Costello of Stamford, CT passed away surrounded by her family on the morning of Monday, February 22, 2021 after a short but very difficult battle with cancer. She was 78 years old. Lena was born on May 16, 1942 in Philadelphia,... View Obituary & Service Information

The family of Margaret Lena Costello created this Life Tributes page to make it easy to share your memories.